Beyond the End of the Word (How To Think-Kins)

by Inbal Ann Hershtig The conference of this year's Sonic Acts Academy revolved around the topics of eco-justice and interspecies. It called us to re-think Anthropocene and discuss potential courses of action for a better collective future on (and of) our planet. Contemplating on its title ‘Magical Thinking: Towards a Future Worth Living’, which implies the ability of thoughts to impact our life on earth, I can't help but feel a bit ironic.

Quoting from the Sonic Acts website: …from environment to democracy, imagining a future worth living might reduce anxiety that paralyses action, thereby creating an openness to more inclusive thinking Let's unpack this – Democracy, Future, Imagination, Anxiety, Thoughts – what do these words have in common? They are all, among many other words, representing concepts unique to mankind. So, here is my question – what is included in this inclusive thinking? When the term 'non-human' puts all flora and fauna in an opposite corner from us 'humans', is there any possibility to include other species in our discourse? And if so, can there be equality using tools and concepts that are exclusive to humankind? How can speaking of inclusion and interspecies in a language only humans speak, bring forth a shared solution?

[towards] a world of social/​ecological justice and multispecies equality

Language (in its narrow sense)* reflects the culture in which it is used. Both culture and language affect each other and adapt to the changes in the world. Hence, the inequality among people is inherently represented in, and affected by, their languages. In matters of race and gender this is known and often discussed, however, when it comes to different species language exhibits a gap so deep it is not perceived as a discrimination to begin with, at least not until recent. Words like ‘multispecies’, ‘interspecies’ and ‘ecocide; are relatively new in the discourse, and are used only in specific circles, and the correct pronoun for animals is still ‘it’ (unless ‘it’ is ‘our’ pet). So can we speak of equality? Can we think-with non-humans or only of them? Maybe first we should ask what is thinking.

Following the definition of the Merriam Webster Dictionary, thinking is ‘the action of using one’s mind to produce thoughts’. Can this description include all living creatures? According to the same dictionary the answer is a partial yes, since part of the definition of ‘mind’ is ‘The element... in an individual that feels, perceives, thinks, wills, and especially reasons’. Oh dear, it seems like we can delve deeper and deeper in this rabbit hole of recursive sub definitions like what is ‘to perceive’. Can we consider that 'to feel' is a shared quality for all living creatures (maybe even plants)? Science will demand proofs, but fortunate enough science is not the lead actor in this event. Sonic Acts locates itself at the intersection of ‘innovative audio-visual and performative art and critical thinking’.

In her book Staying with the Trouble, Donna Haraway states that ‘To think-with is to stay with the natural-cultural multispecies trouble on earth’. But what does it mean? As far as I see it, a shared experience is a key for interspecies equality. Such experiences can be: having a body, experiencing pain, fear, enjoyment grief and death. This is well described both in the Haraway’s reflection on grief** as in Terike Haapoja's artworks, which addresses animality and death. 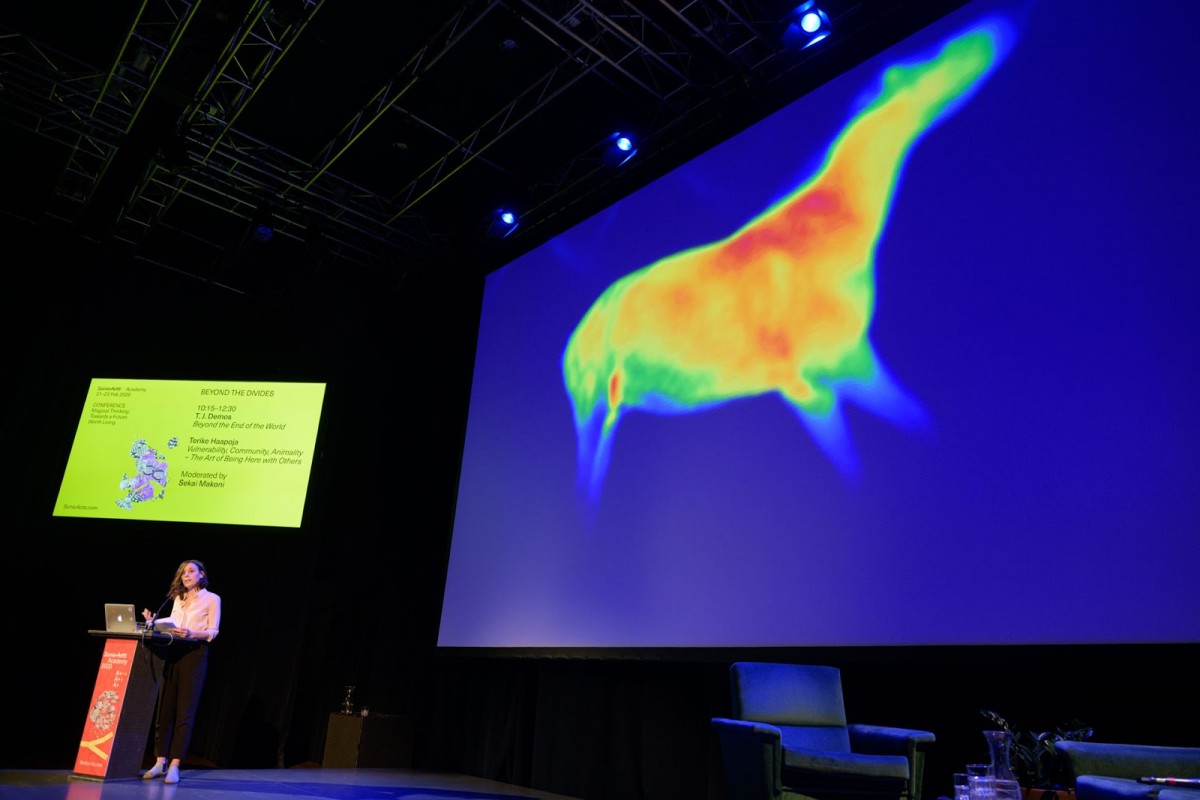 Terike Haapoja presenting a still frame from her video Entropy (2004), an infra-red shooting of a horse's body cooling down after its death.

Although lots of words were used to articulate thoughts during this year’s Academy, there were other ‘Sonic (and visual) Acts’ that presented these ideas. For instance the use of field recordings ('Listening to the Ecocide' by Anja Kanngieser), enchanting yet ominous visuals and audio ('As We Used to Float', by Nadin Samman), mythology-like drawings ('Geostories', by Rania Ghosn) and example of immersive audio visual installation (in the works of Terike Haapoja Waiting Rooms and the upcoming Museum of Becoming). What connects these examples is that they were all brought up as part of talks held by artists or in relation to specific art projects. Artists bring with their practice a different set of tools, they emphasise sensorial experience and adopt the points of view of others, they dive (sometimes literally, as in Nadim Samman’s case and call us to imagine a ‘future worth living’. With the awareness of the untranslatability of some experiences, there is still a growing motivation to re-think and learn from shared experience promoting solidarity. And while theory is concerned with the bigger scheme of things, artists react on and relate to particular cases, as shown this year in the variety of talks, installations and performances. Getting back to the conference title – 'Magical thinking' – I felt an inner opposition to the concept of human thinking as a main agency for change. However, after listening to the various talks, and with combination to the artistic projects, I start to think maybe it is on me to ‘unlearn’ thinking as I have been used to see it – an explicitly articulated textuality of academic, theoretical and scientific disciplines, all descendant from Modernity and the Enlightenment. In the last decade or so we have witnessed the growth of artistic research and other knowledge creating fields which borrow methods from the arts. The gap between us humans and the rest of the living beings seems to me as a place to linger in – like Haraway suggests, to stay with this trouble. It probably won’t be comfortable, but it might help us more than fearing some untouchable catastrophic dystopian Future. * Merriam Webster dictionary defines language as – ’the words, their pronunciation, and the methods of combining them used and understood by a community’. ** ‘Grief is a path to understanding entangled shared living and dying; human beings must grieve with…’. From Staying with the Trouble, Donna J. Haraway, Duke University Press, Durham and London, 2016.
This site uses cookies.