Nikel at the English Wikipedia. Nikel at the Russian Wikipedia. Nikel at Mapcarta Website of Nikel (in Russian) www.admnickel.ru Website of Katya Larina and U:Lab.spb Photos by Tatjana Gorbachewskaja John T. Lyle: Design for Human Ecosystems Nickel slag Kola Ecogeochemistry 1995 website about the ecology and geology of the Kola Peninsula, with regional geochemical maps Website of Sergey Novikov, who photographed closed cities, Nikel, and the Kola Superdeep Borehole. www.sergeynovikov.com Interview with Sergey Novikov about his series of photos of Soviet closed cities. Not entirely related to Nikel, but also not unrelated. Another short text on Sergey Novikov’s photo series.

RESEARCH SERIES #25 Compiled by Arie Altena Nikel is a small Russian mining city near the border with Norway. It was founded in the 1930s after enormous quantities of nickel were found nearby. At the time the area was Finnish. An infrastructure for mining the nickel was built in the 1930s with help from Canadian companies. Mining operations began in 1940. In 1944 Nikel became part of the Soviet Union after the Red Army defeated Finland. Nowadays slightly more than 12,000 people live in Nikel. The Norilsk Nickel smelter dominates the city. It was responsible for wide-scale pollution in the 1980s that destroyed much the surrounding nature. Since then pollution levels are lower, though walking through Nikel when a Northern wind is blowing often leaves the taste the sulphur. On a first visit, Nikel – with its blocks of flats, vacant buildings, heavy industry, the smelter and the boiler house – looks like the perfect location for a post-apocalyptic film. But looking closer reveals many different, warmer and humane aspects as well. We have visited Nikel numerous times with the Dark Ecology project, and have grown fond of it. Two years ago we met the Russian architect Tatjana Gorbachewskaja in Amsterdam. She was born and raised in Nikel. Meeting her led to a Dark Ecology commission: the research project Nikel Materiality. In Nikel Materiality Tatjana Gorbachewskaja and Katya Larina – a Russian specialist on Soviet closed cities – meticulously investigate the materials and textures of Nikel. More precisely Nikel Materiality explores Nikel through the lens of its materials and textures. They developed a model which captures the interaction between the architecture of Nikel, the historical development, and the harsh environment – the Arctic climate. In Soviet times Nikel was a planned mono-industrial city. The infrastructures – both material (heating for instance) and immaterial (higher wages, longer holidays, good facilities) – were well cared for. It was a city protected by an invisible ‘dome’. The planning hardly took the environmental consequences into account. Gorbachewskaja and Larina argue in their research that Nikel became a prime example of a city that is alienated from its natural environment. They describe Nikel as ‘a city in a bubble, protected by and therefore isolated by top-down state control for many years. This Nikel is a structure which can be artificially and technologically reproduced anywhere, it’s a place which denies its environment and is no longer related to its geological or climate context’. After the fall of the Soviet Union, Nikel was very much left to its own devices, and the urban structures, now poorly maintained, interacted with the environment. Through this interaction new textures and materials became part of the city. During the second Dark Ecology Journey Tatjana Gorbachewskaja and Katya Larina presented their initial research and guided groups of people through the city, pointing out many interesting aspects in the architecture and urban structure. A booklet catalogued the materials and described the analytical model they developed. They consider the artefacts they collected as objects from a cabinet of curiosities, as samples of a unique ecology which emerged under the ‘protective dome’ and were transformed when the ‘dome’ 'collapsed. They classified about 2000 artefacts using the ecological theory of John T. Lyle, which he proposed in his book Design for Human Ecosystems. The artefacts and material samples are grouped according to four themes: The Slag, Self-Organising Boundaries, Energy Infrastructures, and Historical Clash. The Slag is a new material, a copper-nickel dust, a by-product of smelting nickel ore. It’s everywhere in Nikel. Self-Organising Boundaries is a group of artefacts that illustrates the boundaries of a ‘competing patterns of existing ecosystems’ within Nikel’s ecology. Under Energy Infrastructures they collected all the artefacts related to the life support mechanisms of Nikel. Historical Clash contains the artefacts related to Nikel’s history: the city was shaped by successive ideological paradigms of Soviet and the Post-Soviet times. This includes five periods: the Finnish Era of the city’s development (1930s), the post World War II Stalin Era, the Khrushchev Era, the Brezhnev Era and the Post-Soviet Era. Each of these periods can be identified in the city. But, they argue, these historical epochs do not exist separately in different city districts, as in most Russian cities. Nikel’s architecture incorporates structures and experiences from previous periods, thus creating ‘a sort of bizarre overlay of the historical layers, where in one building we can see the imprint of different epochs’. Through the catalogue of artefacts they presented Nikel as a ‘material system’, or as they state, as ‘a multi-scalar expression of the new materials which appeared and evolved in the city fabric.’ The research is now available on the Dark Ecology website, which contains their analytical model, a catalogue and an interactive map. Series of photos trace how different materials emerged in Nikel. On a micro scale these show the physical properties of the materials, and on a macro scale they indicate the socioeconomic processes in the city as well as environmental processes of the region. Through the exploration of the ‘materiality’ of Nickel, Gorbachewskaja and Larina reveal the emergent symbiosis in Nikel of the natural environment and alien materials brought in through human activity. Nikel definitely is an example of an extreme Anthropocene landscape. The latest Dark Ecology book Living Earth (2016) includes an interview by Mirna Belina with Tatjana Gorbachewskaja and Katya Larina about their research. Here is an excerpt from their conversation. Mirna Belina So we could see this city as a living system? Katya Larina Nikel was initially set up as a very artificial system, controlled top down by the state. But in time it started behaving and expressing itself as a real living organism. All of its components, including the materials from which it is built, are changing and evolving to adapt to the transforming conditions. All materials behave dynamically in Nikel. They degrade faster than elsewhere. Nature is quite aggressive. It’s all about the energy the city shares with nature and for which it competes with nature. Tatjana Gorbachewskaja This city is slowly opening up to its environment. And this process is a self-organising process. No one controls it! MB What about the pollution from the smelter? TG The main ecological damage happened in the 1980s, when the company started smelting a non-local material, the nickel ore imported from Norilsk (the mining city further to the East in Russia), with a high concentration of sulphur dioxide. It killed almost all the vegetation around the city within just a couple of years. Another cause of major damage was the collapse of the Soviet Union in the 1990s. That had an even worse impact on Nikel. The city lost its source of social security and its future perspective. People started leaving the city. It’s still possible to trace the scars of these processes in the material tissue of Nikel. It’s a city fighting to survive. Nature is slowly recovering because the company now mostly processes local ore. The city is also starting to take on its proper size. So it is stabilising. Let’s hope! 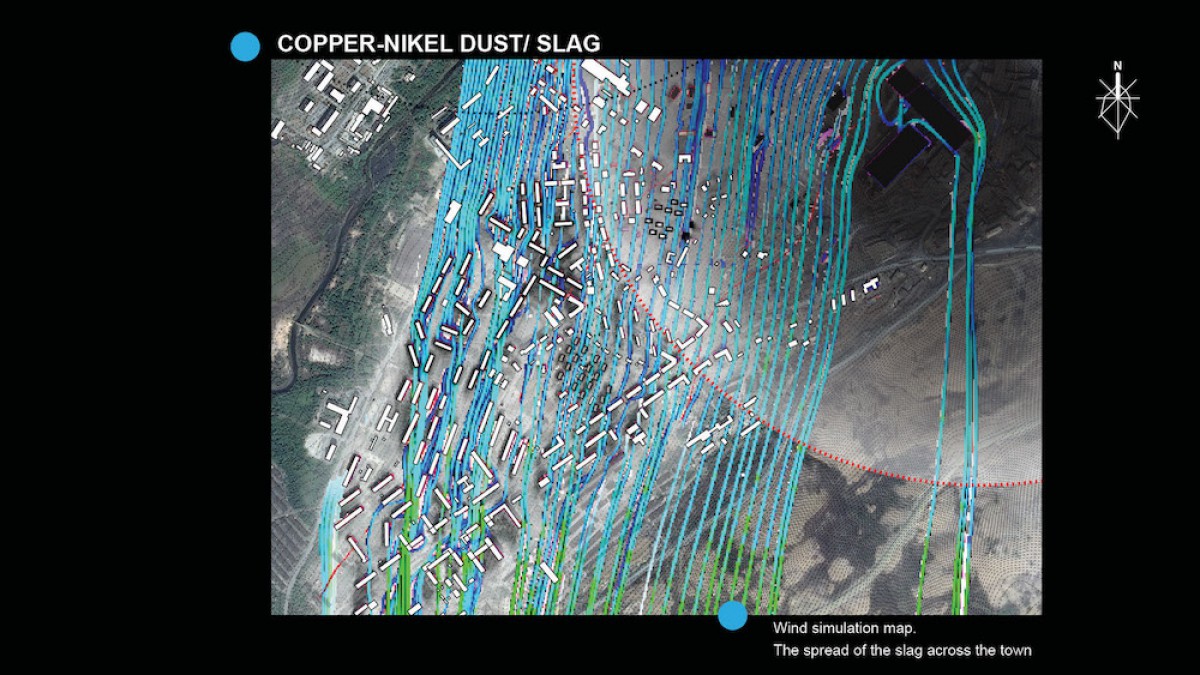 MB You said in your lecture in Nikel during the second Dark Ecology Journey that one of the most interesting parts of your research was the perception of the city as an infrastructural element. Could you elaborate on that? KL Infrastructures create comfortable spaces for people. An example is the heating infrastructure. Nikel needs such a comprehensive life-support infrastructure because it’s located in such a hostile environment. It was supported by an infrastructure for a long time but at some point in the 1990s, when it stopped functioning properly and had to interact with nature, it began falling apart, it transformed, and developed another life. In other cities these life-support infrastructures are not visible, they are hidden below the surface, but here their presence above the surface emphasises the city’s artificiality. TG In the Arctic, the most important thing is the artificial energy network. Nikel’s energy infrastructure requires very high maintenance; it is a high resource-consuming component of the city. For example, in Soviet times, buildings were regularly painted in bright colours so that the residents did not suffer from colour starvation. Now, because of the low maintenance financing and the harsh climatic conditions, all the layers of paint on the façades have cracked to expose the surface beneath them. Also, heating pipes are not underground in Nikel, they are built above the ground because of the permafrost. It’s like an exposed artificial organism. You see the flow, the veins. That’s how we set up our map of Nikel—we tried to show the infrastructure veins of the city. MB Did you present your insights about Nikel to locals? KL Yes, we had a presentation in Nikel for the local people. For us, the process of the environmental degradation indicates an evolutionary process of the city’s artificial system, revealing its qualities. For inhabitants, it’s mostly a personal tragedy. We were worried that we would be misunderstood, but surprisingly, we had quite a positive response. TG A teacher from the art school pointed out one more important energy resource in Nikel, another important resource of Nikel materiality: the people. And that is true: they really are the driving force of the city. 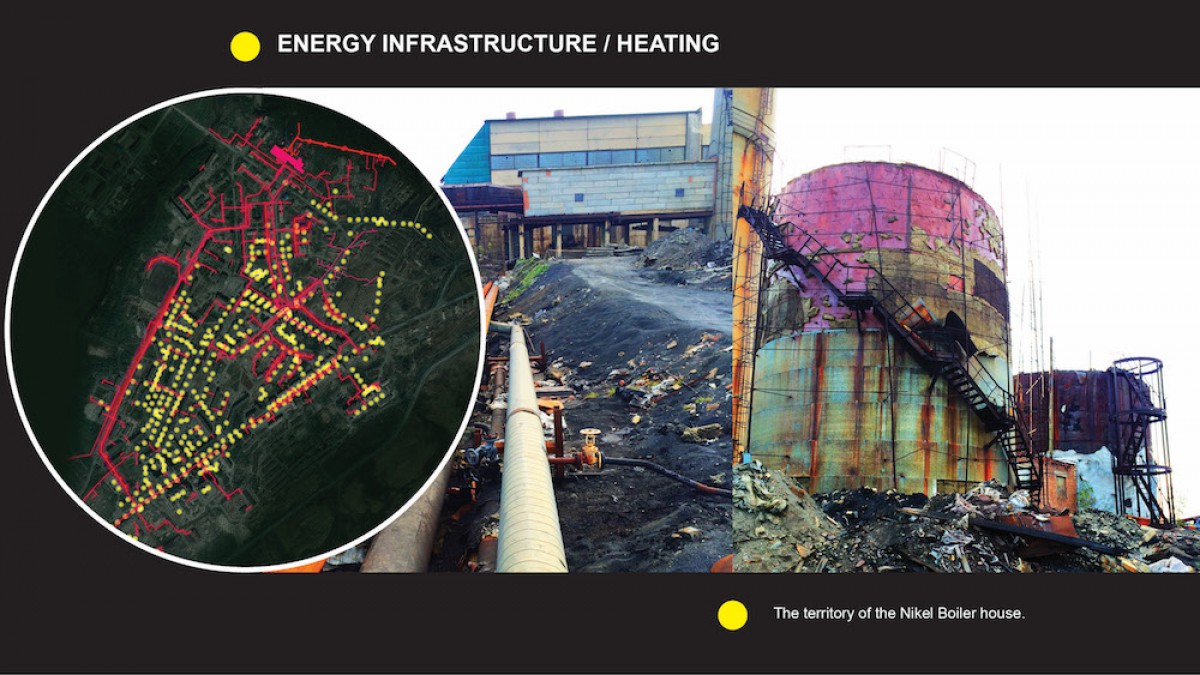 Tatjana Gorbachewskaja (RU) is an architect and urbanist who grew up in Nikel, Russia. Before starting her own praxis in 2014, Gorbachewskaja worked as architect and leading designer at UNStudio in Amsterdam, under Van Berkel & Bos. She is currently a lecturer and PhD candidate at the Design School in Offenbach, Germany. Katya Larina (RU) is an architect and urban designer who received her MA in Landscape Urbanism from the Architectural Association, London. She is co-founder of the research and education project U:Lab.spb, which develops tools that are used in the fields of design and analytics of critical urban environments in Russian cities. U:Lab.spb focuses on socioeconomic strategies in combination with knowledge from urban planning and ecology to foster the redevelopment of Russian industrial cities and knowledge centres.

Nikel Materiality by Tatjana Gorbachewskaja, in collaboration with Katya Larina, seeks to explore Nikel through the prism of the unique material substances that this city has created.