On Friday, 22 April from 18:30 to 3:00, Sonic Acts is back with a monthly Night Air series at OT301 in Amsterdam – the city built on sand. Our next gathering, Shifting Sands, brings together talks, films, sounds and performances to dig into the relationship between sand, the history of pollution and economy. Sound artist Félix Blume guides us on a listening journey to a major gold and silver mining hub in Mexico, emphasising that the desert, far from being hostile, is prolific with life. Scholars Jeff Diamanti and Michaela Büsse trace flows of particulate matter – dust, emissions, pollen, sand – as they are situated and carried across geological time. Enar de Dios Rodríguez’ film Vestiges, along with Pia Borg’s Silica, Maika Garnica and Ans Mertens’ Interlude, and 15” Sand Economy film loops by Yanjin Wu take us through the politics and poetics of sedimentary rock. LÖSS, a sound performance by Farzané, simulates system dynamics of sand formations, which serve as a model for critical states and self-organisation. Finally, it wouldn’t be Night Air without a last blast from a lineup of unique DJs ready to shake the sand under our feet: Femi, TAAHLIAH, our very own Snufkin, and Europa. VENUE OT301, Amsterdam House rules TICKETS Doors open from 18:30 €8 Full programme (starting 19:00) €6 Late entry (performance & Club from 22:30) TIMETABLE 18:30 Doors open TALKS 19:00 Félix Blume – Talk + Listening Session 19:50 Jeff Diamanti – Talk + Q&A 20:30 Michaela Büsse – Talk + Q&A 21:10 Break FILMS 21:25 Vestiges by Enar de Dios Rodríguez 21:50 Silica – Film by Pia Borg 22:15 Interlude – Film by Maika Garnica & Ans Mertens 22:30 Break PERFORMANCES 23:00 LÖSS – Live performance by Farzané 23:35 Femi – DJ set 00:25 TAAHLIAH – DJ set 01:15 Snufkin – DJ set 02:00 Europa – DJ set 3:00 End time PROGRAMME Shifting Sands brings into focus the ecological impacts of sand excavation and consumption, which are marred by displacement and continuous colonial expansion. Shores, dunes and deserts are figures that will follow us throughout the evening. In their grains we can read the history of the world’s second most consumed material after water, shaping everything from our homes to our computer chips. Shifting, grinding, granulating… sand is matter in motion. It drifts ephemerally across landscapes and is industrially manoeuvred across oceans and continents. From fine powder to razor-sharp shingle, it is a geological archive transporting crystals of deep time into the present. Sound artist Félix Blume will take us on a listening journey to the altiplano Potosino in central Mexico, a major gold and silver mining hub. Commissioned by ARTE Radio, his piece Desierto (2021, 24’) is filled with recordings from these elevated plains, showcasing that the desert is far from empty. Currently residing between Mexico, Brazil and France, Blume’s process of sound-making is often collaborative. Focusing on practices of listening, he works with communities, utilising public space to explore human dialogues with their environments. 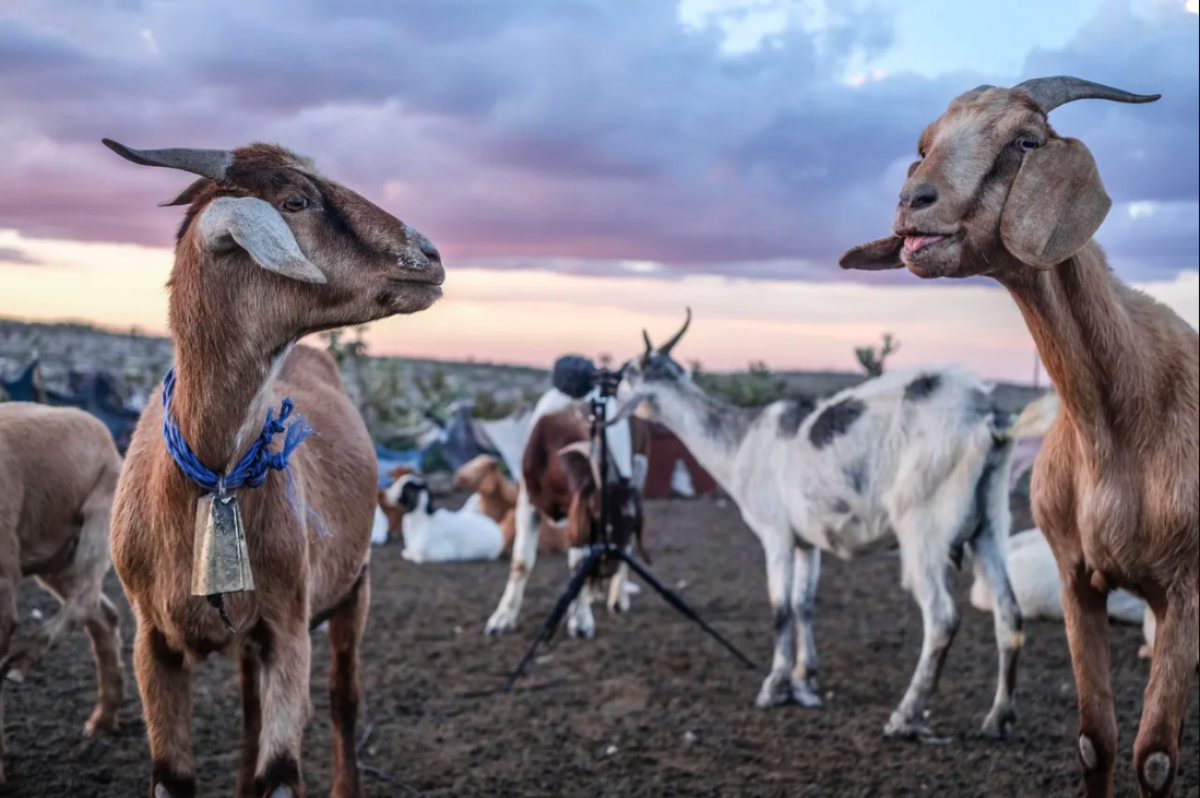 Jeff Diamanti is Assistant Professor of Environmental Humanities at the UvA. His book Climate and Capital in the Age of Petroleum (Bloomsbury, 2021) tracks the political and media ecology of fossil fuels across the extractive and logistical spaces that connect remote territories. His new research, Bloom Ecologies, is about phytoplankton, phosphorus, and the spectre of hypoxia. Together with Fred Carter, he organises the FieldARTS residency. As part of his talk Phosphate Futures: Body, Territory, Mutiny Diamanti will unfold the figurative force of elemental phosphorus across four fields on Earth: Amsterdam, Netherlands; Port of Elizabeth, South Africa; Laâyoune, the Sahrawi Arab Democratic Republic; and the moraine of the Greenland Ice Sheet. Michaela Büsse is a Research Associate at the Institute of Cultural History and Theory, and Associated Investigator at the excellence cluster “Matters of Activity. Image Space Material” at Humboldt University in Berlin. Focusing on the centuries-long history of land reclamation in the Netherlands, during her lecture-performance Granular Grammer, Büsse will unearth how sand has become one of the country’s most important resources. She will present clips from her new film that question how an industry that started out as protection against flooding has become a serious business. Courtesy of the artist.

Visual artist Enar de Dios Rodríguez’s film Vestiges (2020, 21’) tracks the extraction and transportation of sand – the irreparable consequences of the demand for this ever-depleting resource. The film reveals contours of devastation left by quarrying, and the gargantuan machinery of sand shipping: ‘temporary islands’ drifting enclosed in tankers or regurgitated through dredgers. Measuring up to the geological scale of these projects, the film traces immense trajectories that intersect industrial hubris, colonialism and remembrance. Installed at the Maltese Pavilion of the Venice Biennale in 2017, Pia Borg’s film Silica (24’) captures the ghostly remnants of human settlements in the South Australian desert. Littered across the dunes are abandoned sci-fi film sets, traces of millennia-old Indigenous cultures, as well as withered towns – the last remains of opal mines following the industry’s gradual collapse. Winner of the Golden Leopard (best international short) at Locarno festival for Abandoned Goods in 2014, Borg’s latest film, Demonic, premiered during Critics’ Week at the 2019 Cannes Film Festival. She currently teaches at CalArts.

Abstracted through shapes, shadows and mirrors in highly granular texture, as well as through the sound of ceramic instruments that Maika Garnica makes herself, together with Ans Mertens their film Interlude (2021, 10’) draws viewers into an experience of intimate, tactile reflection. Resulting from an artistic residency at a residential care home in Edegem, Antwerp, during the pandemic, the film gathers insights from people with dementia. It imagines how lives resonate beyond their apparent fading: as vibrations in their environment. In the cinematic installation 15” Sand Economy, sand extraction slips through the cracks and bypasses regulation. After excessive dredging of Poyang Lake, the largest sand mine in the world located 600 km up the Yangtze river from Shanghai, the Chinese government restricted further sand extraction. Yanjin Wu attempts to capture the alternative sand economy that is developing in the aftermath, aided by independent sand-related advertising on TikTok. She compiled material from more than 400 videos creating a complex patchwork that speaks about the current sand crisis. Leading us into the later part of the evening, sound artist and researcher Farzané will perform a live rendition of LÖSS. The piece centres on a sonic phenomenon known as “booming sand”, where collapsing avalanches running down dunes produce a hypnotic, resounding vibration. Using techniques of granular synthesis and field recordings, the “booms” are spatialised into 4 sound channels to create an immersive experience. Conducting investigations into electroacoustic music composition, computer science, linguistics, cybernetics and acoustic ecology, Farzané’s recent works explore natural algorithms and human-machine interaction. ​​ 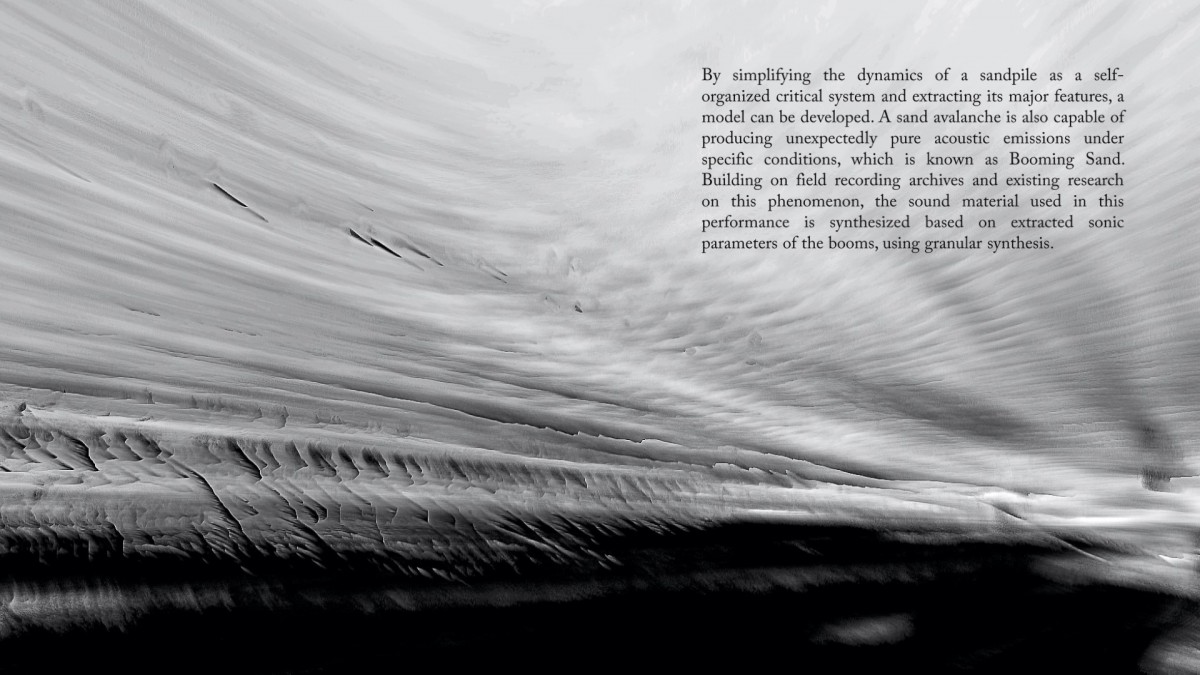 Hailing from Stockholm, Femi has spent the past eight years organising parties and events in the city. Currently responsible for playlist curation and talent scouting at the Swedish record label YEAR0001, her sets are distinguished by fusing club sounds from various eras into a melodic and euphoric cocktail. From trance and techno to ambient and breakbeat, Femi pulls her tracks from across the genre spectrum, blending her eclectic selections to perfection. Glasgow’s rising star TAAHLIAH made a name for herself in the underground queer scenes of both Scotland and Berlin. Having initially started out as a DJ, she took to the stage as a producer in 2021, releasing her transcendent debut mini-album Angelica. Featuring razor-sharp sounds, laser-driven kicks and alluring vocals, TAAHLIAH creates unique, full-throttle musical experiences. Self-diagnosed chronic fever-dream Snufkin is an Amsterdam-based DJ shattering musical conventions internationally. Characterised by apocalyptic noise and harsh cuts, their sets wander down unlit and untravelled paths. With performances at Sonic Acts, Strange Days, PC Music, Progress Bar, Subbacultcha and Slagwerk, amongst others, Snufkin has solidified their cutting-edge versatility and intuitive reflexes time and time again. A tour-de-force of seismic magnitude, Europa (Europa in Flames) is a Hamburg-based DJ and producer. Ranging from highly innovative and forward-thinking club tunes to blissful ambient melodies, Europa showcases a unique understanding of his craft. Taking these skills to the decks always promises a thrilling ride full of rushing rhythms and climactic drops. NIGHT AIR Night Air is a series of online transmissions that aims to make pollution visible by bringing forth the various side-effects of modernity: from colonial exploitation of people and resources to perpetual inequalities brought about by the destruction of the environment and common land – in other words, destructive capitalist practices that shape both our environment and human-nonhuman relations. **Night air is a myth with its origins in miasma theory (from the Greek for ‘pollution’). The theory held that smelly air from decaying organic matter caused illness. The smell would intensify and worsen by night, so night air became synonymous with poisonous and noxious vapours that could even cause pandemics such as cholera or plague. Only with developments in medicine and various scientific endeavours around the London cholera epidemic in the mid-1800s, did germs replace the ‘unhealthy fog’ as the culprit for diseases. And now, even though the idea has been abandoned, night air still echoes in words such as malaria (‘bad air’ in Italian), which actually connects air-borne poison with flying pests such as the disease-carrying mosquitoes.
This site uses cookies.