On Tuesday 22 June, Sonic Acts continues its Night Air series of online transmissions with Nuclear Unknowns, moderated by Kyveli Mavrokordopoulou. Nuclear Unknowns takes us down the complex path of radioactive pollution, exploring the subject’s ecological, artistic and geopolitical tangles. During an evening of talks, screenings and performances, artists and curators will discuss different strategies to grapple with nuclear energy’s uneven and calamitous aftermath. → Tickets (€3,50) → Attend on Facebook Ticket-buyers receive a link to the Livestream (inc. film stream) via email. Beginning at 20:00 CEST, this live online transmission features talks by artists and researchers Kyveli Mavrokordopoulou, Agnès Villette and Jason Waite, before a thematic soundtrack to close the evening by artist duo Whitespace. The films Crossroads (1976) by Bruce Conner, Uranium Hex (1987) by Sandra Lahire and We Have Always Known the Wind’s Direction (2019) by Inas Halabi will be shown alongside the panel and can be viewed from Saturday 19 June, 20:00 CEST. Audience members are invited to join in the conversations via the live-chat Q&A. Kyveli Mavrokordopoulou is an art historian and curator. She is currently finishing a PhD at the École des hautes études en sciences sociales (EHESS), Paris, on the subterranean imaginary in contemporary art, especially concerning nuclear spaces. She has contributed to various projects about nuclear technologies at the Environmental Humanities Center, Vrije Universiteit, Amsterdam, where she co-organised the interdisciplinary event series Nuclear Waste Weeks. She coedited Kunstlicht: Nuclear Aesthetics (Vrije Universiteit, 2019) with Ruby de Vos. She currently teaches a seminar on art and nuclearity at the École supérieure d’art du Nord-Pas de Calais/Dunkerque with Agnès Villette, with whom she is working on a series of toxic tours across nuclear infrastructures in France. Mavrokordopoulou is an ARTWORKS curatorial fellow of the SNF Artist Fellowship Program in 2020–21. Agnès Villette is a PhD candidate at Winchester School of Art, her practice-based doctorate in Nuclear Aesthetics investigates the Radioactive Ruins of the Norman territory of La Hague. She is also a freelance journalist with an art practice in photography. Trained in literature, she gained an Agrégation in Modern Literature at Paris Sorbonne and a Master in Art Photography at London College of Communication, London. She has previously taught at Glasgow University, Queen Mary College, London and Winchester University and is currently a lecturer in Visual Culture at Cambrai Art School in the North of France. She is currently developing four art projects at the intersection of photography, writing and theory, such as the photographic series Alien of the Species exploring invasive insects and entomology, Beta Bunker, researching bunker architecture, Haunted, her PhD project about the Norman peninsula and its nuclear Cold War legacy and finally Landemer, a non-fiction novel based on a cold case that took place in 1969, in Cherbourg. View of the Fukushima exclusion zone. Courtesy of Don’t Follow the Wind. Radiation levels on a site visit. Courtesy of Don’t Follow the Wind. 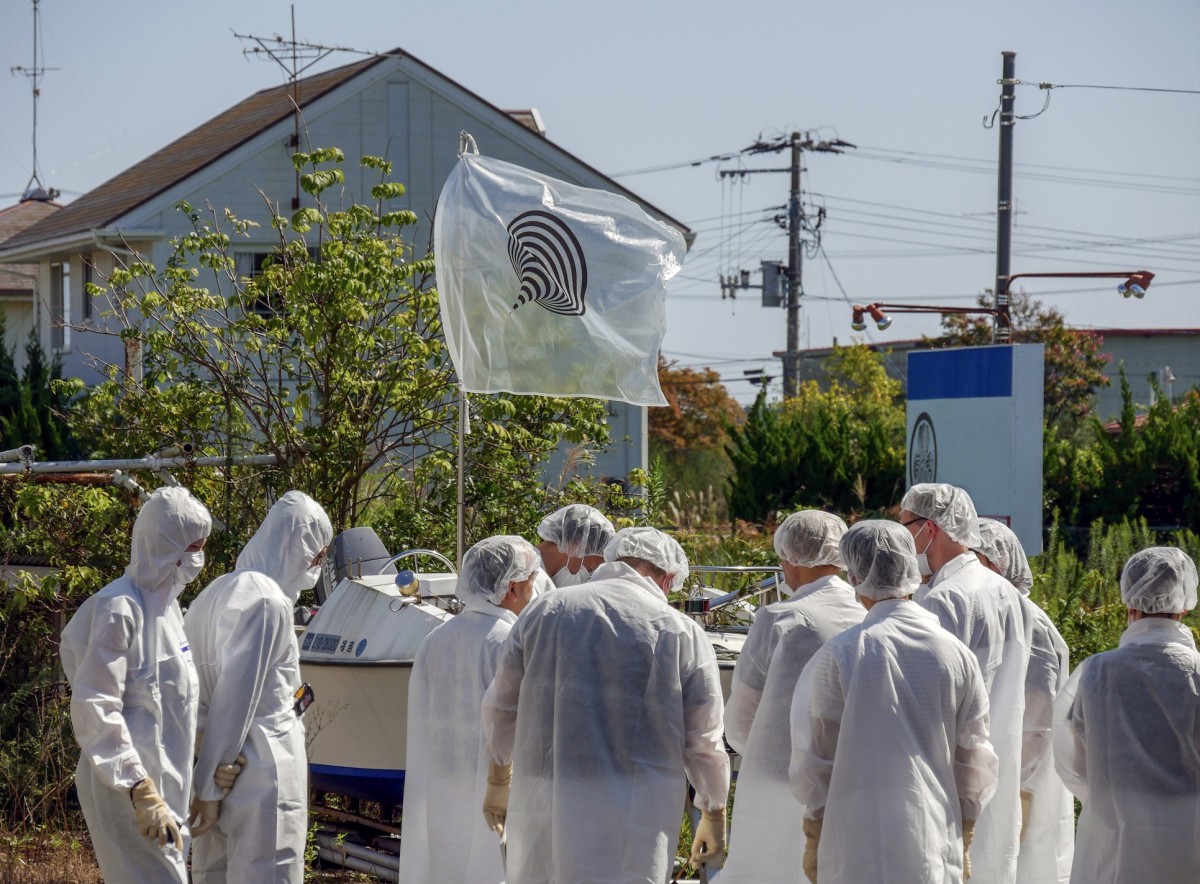 Jason Waite is an independent curator and cultural worker focused on forms of practice producing agency. Recently working in sites of crisis amidst the detritus of capitalism, looking for tools and radical imaginaries for different ways of living and working together. He is part of the collectives Don't Follow the Wind and This Useful Time Machine. He has co-curated exhibitions at Palais de Tokyo, The Kitchen, Art in General, and Casco Art Institute where he was curator. Don’t Follow the Wind is a long-term international project. It takes the form of an ongoing exhibition inside the restricted Fukushima Exclusion Zone – the area comprising parts of seven towns that was forcibly evacuated in the wake of the 2011 disaster due to radioactive contamination from the meltdowns at the Fukushima Daiichi Nuclear Power Plant, separating residents from their homes, land, and community. New works developed by twelve participating artists have been installed in the zone at multiple sites that were lent by former residents, all of which are contaminated and were evacuated immediately after the disaster. As the zone remains inaccessible to the public, the exhibition remains largely invisible, only to be viewed in the future, when the ban on entering the area is being lifted.
Whitespace · Whitespace V
After the Nuclear Unknowns panel, Whitespace closes the evening with a live thematic DJ set. Whitespace is a sonic dialogue between Casimir Geelhoed and Anni Nöps. Carefully interlaced textures, ambiences and abstract sounds carve out an intimate aural landscape, drifting between soothing serenity and chaotic collapse. FILMS Nuclear Unknowns is accompanied by a film programme that stages three acts of nuclear history through three films. The mesmerising image of a mushroom cloud blooming out of a serene seascape, again and again, serves as an introduction; then we are led underground, into the toxic messiness of radioactive deposits in uranium mines at the tail end of the Cold War. It concludes with a grim account on the possible disposal of radioactive waste in the West Bank. These works examine how ‘the nuclear’ – both as a physical and a technopolitical object – operates secretly but cruelly, exposing its uneven geographies and violent legacies. Slipping between visibility and invisibility, surface and depth, earth and bodies, the three films piece together seemingly unconnected yet interdependent episodes of nuclear pasts and presents.  We invite you to watch the films in chronological order, sketching out a loose timeline that starts with the overwhelming force of the atomic sublime that is Bruce Conner’s Crossroads (1976), a film that invokes the apocalyptic nuclear threat. Next, Sandra Lahire’s Uranium Hex (1987) moves away from the sublime visuality of the bomb and comprehends the nuclear viscerally in the wake of the Cold War. Lahire’s film is an oddity, revealing the cavernous permeability of the female body trapped in the irradiated underground. Finally, We Have Always Known the Wind’s Direction (2019) by Inas Halabi gestures at how nuclear technologies and power structures feed off each other, sometimes in ways that are just coming to light in the nuclear present. Crossroads (1976), 37 min, Bruce Conner 'Operation Crossroads' was the name of the first two of twenty-three nuclear weapons tests the United States conducted at Bikini Atoll between 1946 and 1958. Both tests involved the detonation of a weapon with a yield equivalent to twenty-three million tons of TNT–the same as the atom bomb dropped on Nagasaki. More than seven hundred cameras, and approximately five hundred camera operators surrounded the test site. Nearly half the world’s supply of film was at Bikini for the tests, making these explosions the most thoroughly photographed moment in history. Bruce Conner (1933–2008) was one of the foremost American artists of the postwar era. Emerging from the California art scene, in which he worked for half a century, Conner’s work touches on various themes of postwar American society, from a rising consumer culture to the dread of nuclear apocalypse. An early practitioner of found-object assemblage, his relief and free-standing sculptural objects, such as Child (1959) and Looking Glass (1964), were widely recognized for their masterful compositions and daringly dark subject matter. Uranium Hex (1987) 11 min, Sandra Lahire (Netherlands IPs only) Uranium Hex by Sandra Lahire deals with uranium mining in Canada focussing particularly on the woman’s work and the destruction of the environment; the film uses a kaleidoscopic array of experimental techniques such as superimposition, re-filming, changes of speed, pace and an elaborate layering of sounds where ‘atmos’ recording mixes with voices, music. The constantly shifting images provide instances with extremely filmic qualities: the image of a man digging out uranium is superimposed over a woman’s back while brash sounds of machinery are heard and a woman speaks, '…it was like being under an X-ray machine day and night'. The film proposes a number of visual instances operating on different levels but never gelling together, the layers of images and sounds are disruptive, breaking up the surface, giving the piece a textural complexity. Sandra Lahire was born in 1950. She studied Philosophy at the University of Newcastle-on-Tyne (BA), Fine Art Film at St Martins School of Art (BA 1984) and Film & Environmental Media at the Royal College of Art (MA 1986). Her films have been shown nationally and internationally at cinemas and festivals including Creteil, Locarno, Berlin, Montreal, Sao Paolo, Turin, Jerusalem, Australia and the Philippines. Writings include Lesbians in Media Education published in Visibly Female (ed Hilary Robinson, Camden Press 1987) and articles for Undercut. 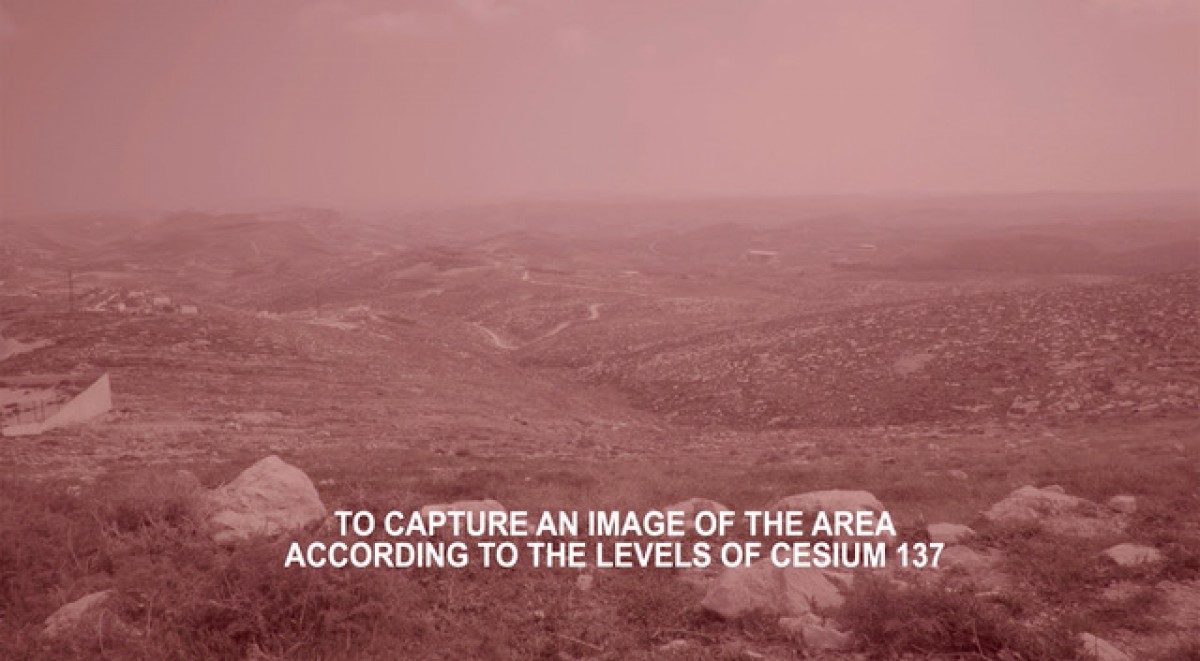 We Have Always Known the Wind’s Direction (2019), 12 min, Inas Halabi We Have Always Known the Wind’s Direction has an outward subject and an inward one. Via a gear-shifting combination of conversation, interview and expressive location footage, it probes the possible burial of nuclear waste in the South of the West Bank. But as the footage cycles between fragmented conversations with a nuclear physicist and landscapes that are uneasily underscored by what we hear (and sometimes tinted an ill-omened red), another context emerges. In various ways, Halabi deliberately thwarts, withholds or delays the delivery of information, and the film comes to turn on issues of representation and conveyance. The isotope Cesium 137, invisible but deadly, could be seen as a synecdoche for a more ungraspable invisibility – the systemic networks of power and control in the region – and this work as a meditation on how to account for the un-filmable but inexorable. Inas Halabi is a Palestinian artist working predominantly with film. Her practice is concerned with how social and political forms of power are manifested and the impact that overlooked or suppressed histories have on contemporary life. She holds an MFA from Goldsmiths College in London and recently completed a two-year residency at De Ateliers in Amsterdam. TIMETABLE All times CEST Tuesday 22 June 19:45 Livestream open 20:00 Introduction 20:10 Kyveli Mavrokordopoulou 20:20 Agnès Villette 20:40 Jason Waite 21:00 Q&A 21:35 Whitespace (DJ) Saturday 19 June, 20:00, until Wednesday 23 June, on repeat Crossroads (1976), Bruce Conner, film Uranium Hex (1987), Sandra Lahire, film We Have Always Known the Wind’s Direction (2019), Inas Halabi, film Night Air Night Air is a series of online transmissions that aims to make pollution visible by bringing forth the various side-effects of modernity: from colonial exploitation of people and resources to perpetual inequalities brought about by the destruction of the environment and common land – in other words, destructive capitalist practices that shape both our environment and human-nonhuman relations. **Night air is a myth with its origins in miasma theory (from the Greek for ‘pollution’). The theory held that smelly air from decaying organic matter caused illness. The smell would intensify and worsen by night, so night air became synonymous with poisonous and noxious vapours that could even cause pandemics such as cholera or plague. Only with developments in medicine and various scientific endeavours around the London cholera epidemic in the mid-1800s, did germs replace the ‘unhealthy fog’ as the culprit for diseases. And now, even though the idea has been abandoned, night air still echoes in words such as malaria (‘bad air’ in Italian), which actually connects air-borne poison with flying pests such as the disease-carrying mosquitoes. Part of Re-Imagine Europe, co-funded by the Creative Europe Programme of the European Union
This site uses cookies.