Shock Waves, a gathering that marked a new season of events under the banner of Night Air*, took place at OT301 in Amsterdam on Friday 5 November. Over the course of the evening, speakers and artists came together with the audience to consider the materiality of sound as a powerful means of resistance and control. The event featured talks by Elena Cohen, María Edurne Zuazu and Yann Leguay, DJ sets and performances from Noise Diva and whiterose, the installation N/pantla by Paula Montecinos & Pedro Matias, plus screenings of the films Between the Bullet and the Hole and Preemptive Listening (Part 1: The Fork in the Road) by Aura Satz. As we take a moment to look back on Shock Waves, we would like to address a warm thank you to those who joined and participated. → Watch our recap video of the event on YouTube or Vimeo: → Browse through our selection of photography on Facebook or Flickr: 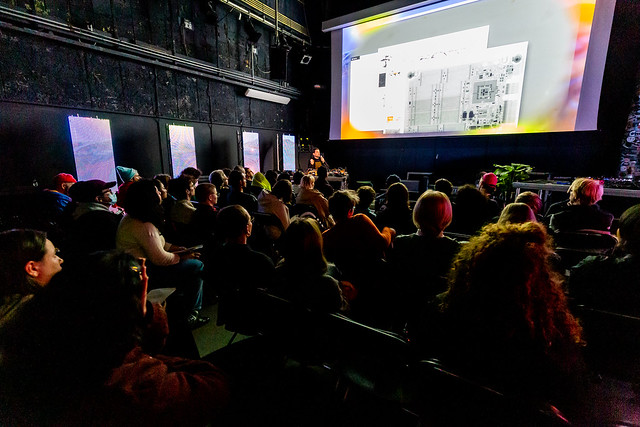 Sonic weapons like the Long-Range Acoustic Device (LRAD), ‘roof knocking’, or ‘music torture’ are frequently used as part of the arsenal of state violence. Elena Cohen’s work as an attorney and professor specialised in repressive police practices offered case studies of how these are deployed in protest, detention, and warfare, causing a range of harm from disorientation and psychological distress to permanent internal damage. As María Edurne Zuazu spoke about in her lecture and wrote in Loud but Non-lethal: Acoustic Stagings and State-Sponsored Violence, such instruments rely on high-intensity and focused sound to suppress individuals by impairing their auditory systems. Yann Leguay’s performative lecture spoke to the dematerialisation of sound and the evolving effects of interfaces, featuring an electrical arc produced by a plasma speaker so powerful that it emanates magnetic disturbance. The two films by Aura Satz approached sonic obedience and disobedience through the trope of the siren and investigate ballistics as a field of study in relation to the role of women in early computing. If the energy of sound can be harnessed to cause harm and stifle dissent, it also constitutes a creative field for confrontation and resistance. Paula Montecinos and Pedro Matias’ installation N/pantla presented a corporeal debordering of fractured sound – addressing how intimately tied gendered and racialised capitalism are to our communal sense of self-preservation, while performances and DJ sets by local artists whiterose and Noise Diva embodied dissonance and noisemaking on the dancefloor. → More information about the event and participants can be found at sonicacts.com/night-air-shock-waves.

NIGHT AIR Night Air is a series of events that aims to make pollution visible by bringing forth the various side-effects of modernity: from colonial exploitation of people and resources to perpetual inequalities brought about by the destruction of the environment and common land – in other words, destructive capitalist practices that shape both our environment and human-nonhuman relations. **Night air is a myth with its origins in miasma theory (from the Greek for ‘pollution’). The theory held that smelly air from decaying organic matter caused illness. The smell would intensify and worsen by night, so night air became synonymous with poisonous and noxious vapours that could even cause pandemics such as cholera or plague. Only with developments in medicine and various scientific endeavours around the London cholera epidemic in the mid-1800s, did germs replace the ‘unhealthy fog’ as the culprit for diseases. And now, even though the idea has been abandoned, night air still echoes in words such as malaria (‘bad air’ in Italian), which actually connects air-borne poison with flying pests such as the disease-carrying mosquitoes. → Stay informed about future events! Subscribe to the Sonic Acts Newsletter.