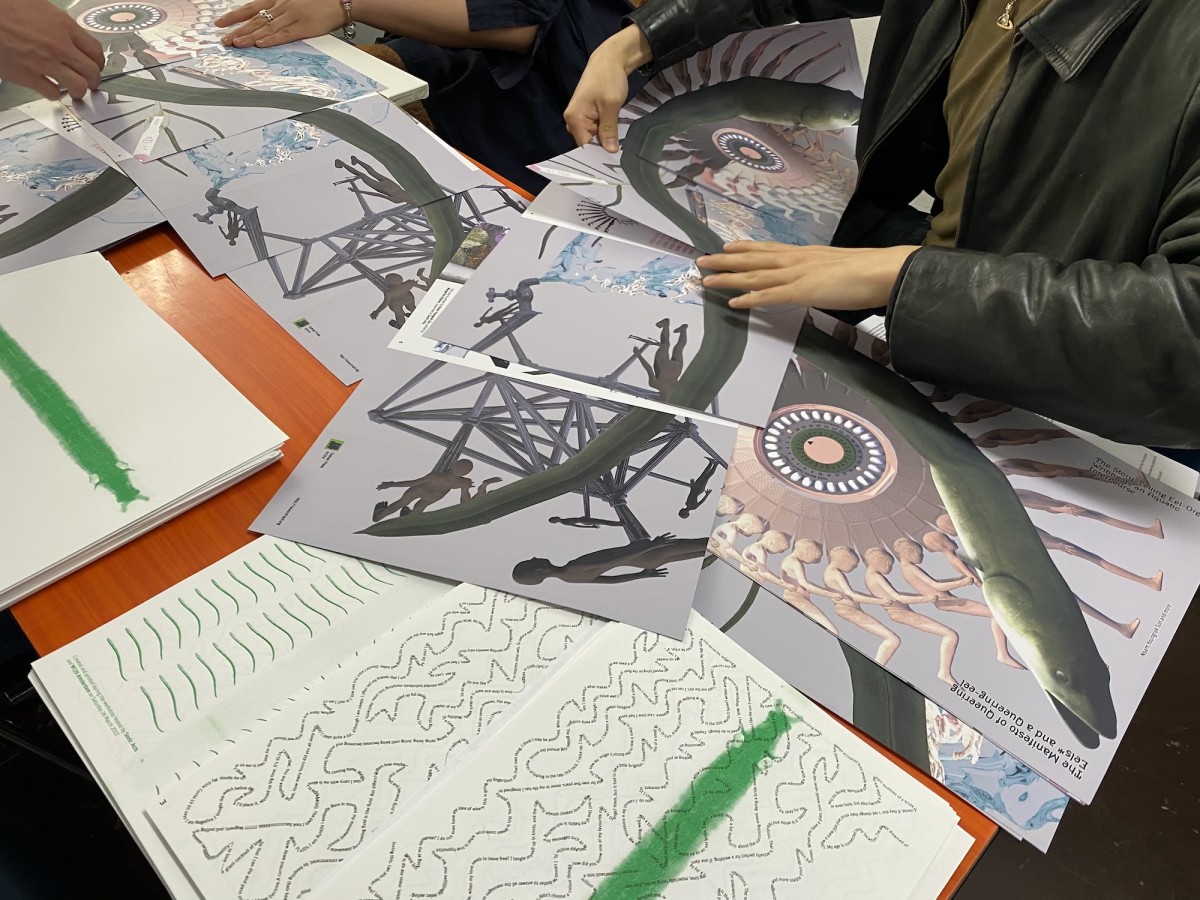 Turbulence Studies: Latent Amongst the Air by Mint Park Bitcaves and The Dark Alphabet

The visual identity of The Dark Universe could very well be a festival event; it’s equally mysterious, layered and well researched as any of the lectures or performance at the Sonic Acts festival. I was curious about the mysterious images and symbols and questioned one of the designers of research and design collaboration Bitcaves, Femke Herregraven. What secret messages did she hide in the posters, folders, tote bags and banners? Banner on Paradiso - design by Bitcaves
Every festival gets the visual identity it deserves. Sometimes a festival, like a filmfestival, simply needs a recognizable, but somewhat neutral logo that can work for a festive opening party as well as a modest retrospective. A logo that can be used for a variety of genres and topics, that’s never unbefitting. Some festivals – mostly design festivals – do the opposite. They invite a designer and give him or her absolute freedom. The results are often stunning, but have very little – if anything – to do with the festival they were created for.
At Sonic Acts it’s not the designer or the organization that claims the spotlight. Everything is centered around the festival theme, carefully chosen and researched by the curatorial staff in the course of the two years (or one year in this case) leading up to the festival. Therefore, each festival edition looks different. Femke Herregraven has designed for The Cinematic Experience (2008), The Poetics of Space (2010), Travelling Time (2012) and this year for The Dark Universe in collaboration with Nina Støttrup Larsen as Bitcaves
Bitcaves describes itself as a collaboration for design and research. They start out with questions and investigations. But these efforts always lead to a design as Herregraven explanes: “We try to find different ways of opening up bulky reports with huge amounts of data. We visualize complex matter, thus making the research comprehensible.” Bitcaves latest projects deal with the concept avoidance. For instance, they researched military design tactics. How does the army conceal it’s presence in an urban environment and how does urban architecture facilitate this?
Another interesting project is Taxodus, a game that reveals the strategies of tax evasion used by corporations such as Google and Apple though taxhaves like the Netherlands. With this game Bitcaves offers us insight into these dark and hidden parts of the financial world. This ties in perfectly with this year’s theme for Sonic Acts: The Dark Universe. While Taxodus the game won’t be part of the festival (the game is in development), Bitcaves’ research is used in the Dark Finance panel discussion. With such strong intellectual connections between Bitcaves and Sonic Acts, it’s no surprise that the visual identity for The Dark Universe is just as dark, multi-dimensional and thoroughly investigated as the festival itself.
Prior to meeting Herregraven I laid out all the festival prints that I could get my hands on: a brochure; the booklet for the exposition; a poster; some flyers and the tote bag. Every item is different, there are multiple photographs, many different symbols in a variety of constellations, Greek symbols, numbers and more. I got the feeling that the compositions weren’t random, but their meaning or message remained hidden. And I also couldn't quite figure out what was (missing) on the photographs.
Herregraven was kind enough to reveal some of The Dark Universe secrets: “We chose a series of photographs made during launches of spy satellites. Almost nothing is know about these spy satellites: who are they spying and what are their coöridinates? This of course, is intentional, these missions are secret and a lot of effort is made to keep them invisible. The paradox is that the launch of a satellite is extremely visible. The launch creates huge amounts of noise and dust. But that’s pretty much the only temporal evidence that proves the existence of these spy satellites. We edited the actual rockets out of the picture so that only the monuments of smoke remain.” tote bag – design by Bitcaves
The swarms of symbols and numbers seemed to me to refer to electronic cirquits or mathematics and astronomy. Herregraven discloses that the symbols are an actual alphabet: “The symbols represent the spy satellites and a letter. We started with a straight line and each letter rotates slightly from that, this line also indicates the position of the satellite in relation to the earth. Together, these satellites form different constellations. If you follow the numbers and connect them, like you do in a connect-the-dots drawing, you can uncover these constellations. I like those drawings because they perfectly illustrate the tension between visibility and invisibility. You can not quite see what it is, but you know there’s something to be revealed. Furthermore, they imply action and involvement, they make you curious.” So every festival design carries a secret message and image encoded in the Dark Alphabet. But our curiosity will be tested until the publication of the festival book where Bitcaves shall reveal the key to the Dark Alphabet. festival leaflet – design by Bitcaves
In some designs, for instance on the rear of the festival brochure, we can detect a different set of symbols, larger than the satellite symbols and unrelated to the numbered constellations. These symbols represent constellations of stars, some known, some unknown. They remind us of the incredibly vast amounts of outer space, stars and dark matter that we know nothing of. This unimaginable universe is one of the key themes of The Dark Universe.
But the emergence of the star symbols between the spy statelites also emphasizes that these satellites are not at all interested in the unknown parts of the universe. In fact, they are aimed at the one planet we know relatively much about, earth. Consequently, the visual identity of the festival refers mainly to the dark universes of governments, control mechanisms and espionage. This is underlined quite literally by the lines that cross out the titles in the festival designs. Herregraven explains: “We researched secret documents and found that classified letters are sometimes declassified. In these documents the titles or numbers are crossed out with a diagonal line. The status of the information in these documents is very dubious: are they secret or not, who decides it they are or aren’t?” By crossing out the name of the festival, participants and themes, Bitcaves calls into question the festival itself and reminds us to be critical.

Sonic Acts 2008, 2010, 2012 – design by Femke Herregraven
The Dark Universe is a theme that fit Bitcaves like a glove. But I assume that it's probably not easy to design an identity for a festival with abstract themes such as Poetics of Space or Travelling Time. Herregraven concurs: “Time is such a difficult concept; it’s everything and nothing. You can’t isolate it and visualize it, it’s always in relation to something else. To illustrate this problem I chose a picture for every page in the book that represented time, for instance, time machines, erosion or instruments to measure time.”
The background for the Travelling Time visual identity was a silver plate with fine circular grooves in it like a music record. Herregraven based this image on the Voyager Golden Record. This metal disk was attached to the Voyager in 1977 en send into space with messages for hypothetical alien life forms. It contained recordings of sound and images with an engraving that showed how the recordings should be played and at what speed. Herregraven: “They chose the most durable material and technique available at the time, because the Voyager will travel on for thousands of years. And this tied in with some of the themes of the festival; the sustainably of information and envisioning the future.”
The two oval shapes in the Travelling Time design were inspired by the cartouches in which the names of Pharaohs were written in, explains Herregraven. These cartouches were an important clue in deciphering the hieroglyphs. You could say they opened the door to knowledge about the past. So when Herregraven joined these two symbolic images she connected past and future without being obvious or relying on worn out visual clichés. But that also means that Herregraves designs need some time and some explanation to be fully appreciated. So look forward to the 16 pages that Bitcaves has in the The Dark Universe book. They might reveal (or possibly create) more layers and mysteries surrounding The Dark Apphabet and other elements of the festival design.
For those who speak Dutch: Tegenlicht (VPRO) is working on a documentary about Taxodus, Bitcaves is involved in the research design of the documentary. Planned to air March 25.