RESEARCH SERIES #24 by Julian Ross Sonic Acts Festival 2015 Born in Iraq, London-based artist Jananne Al-Ani engages with the politics of the image. In her works in photography, film and video, Al-Ani interrogates our ways of seeing by undermining the structures of scale and perspective in which visual culture is shaped. While her conceptual application is subversive, her methods are gentle, often resulting in evocations of assumptions which are quietly unsettled. In her work in the 1990s and early 2000s, her central subject was the Western portrayal of the Middle East, in particular, women and the veil. Working closely with her immediate family, her works undercut media-fuelled perceptions of ‘other’ cultures with personal narratives and playful mind-games. Shifting away from the human body as an image to the human imprint, her recent series The Aesthetics of Disappearance: A Land Without People illustrates Al-Ani’s preoccupation with the ways in which history is etched into the landscape. Bold in technique yet comparatively subtle in effect, her films Shadow Sites I (2010) and Shadow Sites II (2011) capture the desert landscape of the Middle East. What appears to be an uninhabitable landscape is revealed to be a home for industrial farms and abandoned military training camps. Playing with the visual codes of modern warfare, the remnants of structures spread out over the land and speak of untold histories of human activity. Presented at the 2015 edition of Sonic Acts curated under the theme of ‘The Geologic Imagination’, the two films shown together drove home the misconception of the border between nature and humanity, a theme that spanned across the works presented in the festival. Film programmer and researcher Julian Ross took the opportunity to interview Jananne Al-Ani during her visit to Sonic Acts where she presented her recent series. 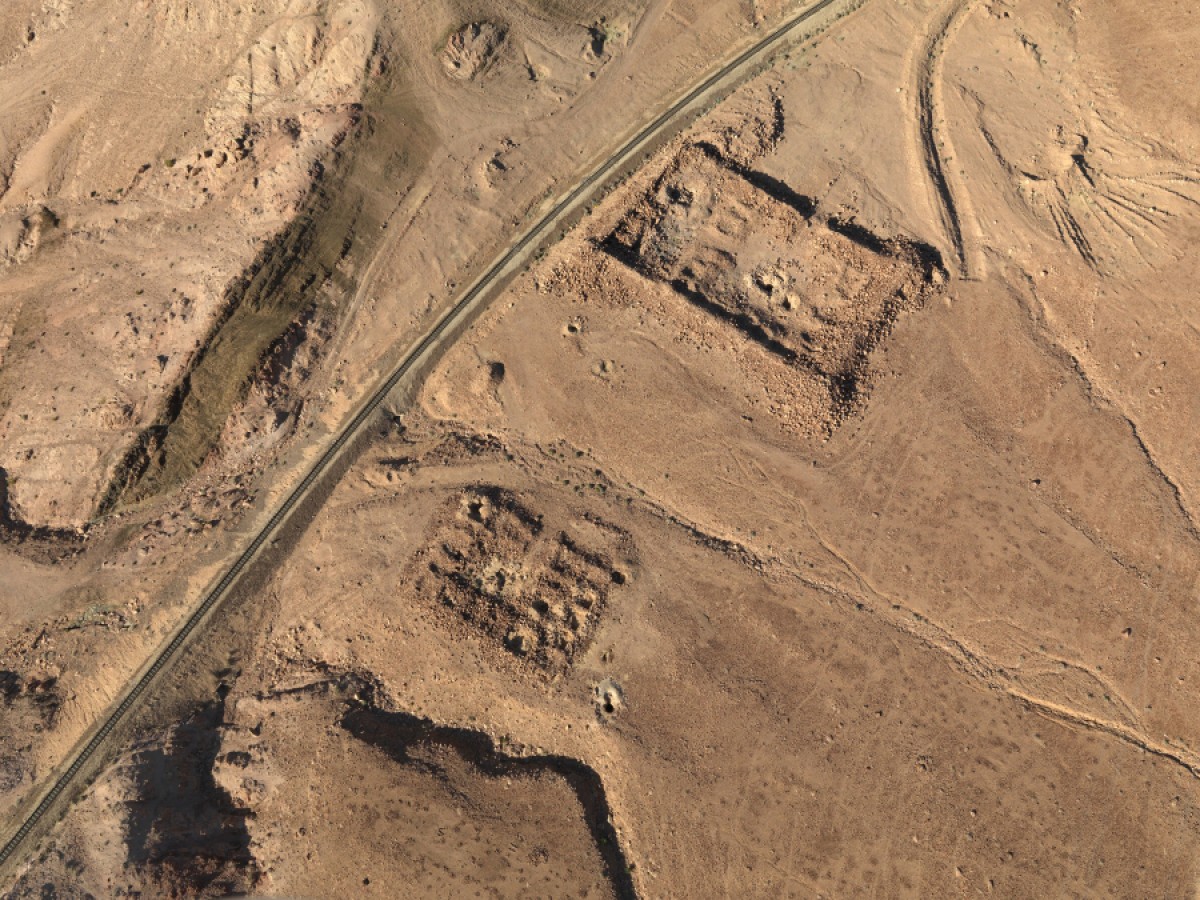 Julian Ross: You’ve been working on The Aesthetics of Disappearance: A Land Without People since 2007. How did you embark on it and how do the Shadow Sites films fit into this? Jananne Al-Ani: This latest body of work started off as a response to the 2003 Iraq War. I had a terrible feeling of déjà vu in the build up to the invasion. I’m old enough to remember the 1991 Gulf War and, although I was born in Iraq, I left in 1980 and so I witnessed the Desert Storm campaign from the relative safety of my home in London, from a European perspective. I was horrified at the lack of context in the reporting of the conflict. There was no real analysis of why Iraq had invaded Kuwait. The complexities of the situation were not addressed and most shocking of all, political analysts often slipped into a lazy regurgitation of nineteenth-century Orientalist myths about the despotic barbarity of the Arabs (Saddam Hussein presented a perfect caricature) and the ‘emptiness’ of the desert landscape. We watched laser guided missiles hit isolated targets but the 25 million people living there were never mentioned. The entire country was cut off from the outside world. Telecommunications systems were destroyed, there were no flights in or out, and no water or electricity. Much of the military and civilian infrastructure was destroyed. Yet nobody was talking about what impact this might have on the population. ‘We’ could function without needing to think about the consequences of the war, it was far away and completely separate from ‘us’. For most citizens of the developed world, this had become the condition of modern warfare in the second half of the twentieth century – it happened to others and at a distance. Clearly, the 9/11 attacks changed all that. This was the pivotal event that led to the wars in Afghanistan and Iraq and got me thinking about how those campaigns related to previous conflicts in the region. I usually work very slowly and do lots of archival research. This project was no exception. I began by investigating first-person accounts of atrocity. The 9/11 attacks on New York were well documented and the images were disseminated in an unprecedented way –most atrocities are not. They usually happen when nobody is looking and the bodies are disposed of quietly. So I began to investigate events for which there was no visual record, no photographic or filmed evidence: just verbal or written accounts. I was trying to work out a way of using the material I found as either text on the screen or as voiceover to somehow allude to the absent images. However, when I juxtaposed this material with my own images of Middle Eastern landscapes, it became too sensational and explicit. In the end, I decided to focus only on sound. In both Shadow Sites I and Shadow Sites II, the shift from more ambient, gentle sounds to those suggesting discord or violence, creates a tension in contrast with the aerial shots of the often beautiful landscapes that appear in the films. JR: Although I’m sure these works are informed by your personal encounters and research, the end result feels like an observation from an ahistorical perspective in a sense that the scale ––not only spatially but also in terms of time–– is vast. In terms of geological time, the conflicts are seemingly insignificant. What seems like an abrupt break in our reality is shown to be a repetition of events in the history of the world. JA: Yes, I very much wanted to explore the idea of repetition but also of resilience in both the films. One of the consequences of the 2003 war in Iraq was the collapse of the Baath dictatorship, which allowed for the excavation of mass graves containing the bodies of those who had been made to ‘disappear’ by the regime over a period of 35 years. The disappearance of civilians in times of war and conflict is of course universal but I became more and more interested in investigating what evidence remains of these events and how the landscape itself often betrays the activities that have taken place in it ––whether it is the traces of a bronze age copper mine where weapons were made or the foundations of a Roman fort, or the footprint of a concentration camp burned to the ground. Going back to the disembodiment you refer to, by shooting from the air with the camera pointing vertically down at the ground, I wanted to suggest the ever-present shadow of state surveillance that we all live under, whether we are aware of it or not. Personally, I think it’s very important to place current discussions around surveillance and the use of unmanned aerial vehicles, including drones and satellites, in a wider historic context. So the films borrow the aesthetic of the earliest aerial surveillance photographs, with their beautiful sepia tones and fine detail, while also replicating the all-seeing perspective of the drone or the spy satellite. In Shadow Sites I the camera steadily drifts across a range of sites, as if searching for something. In Shadow Sites II, that something seems to have been found and, instead, structures in the landscape are locked onto and zoomed into as if under attack. 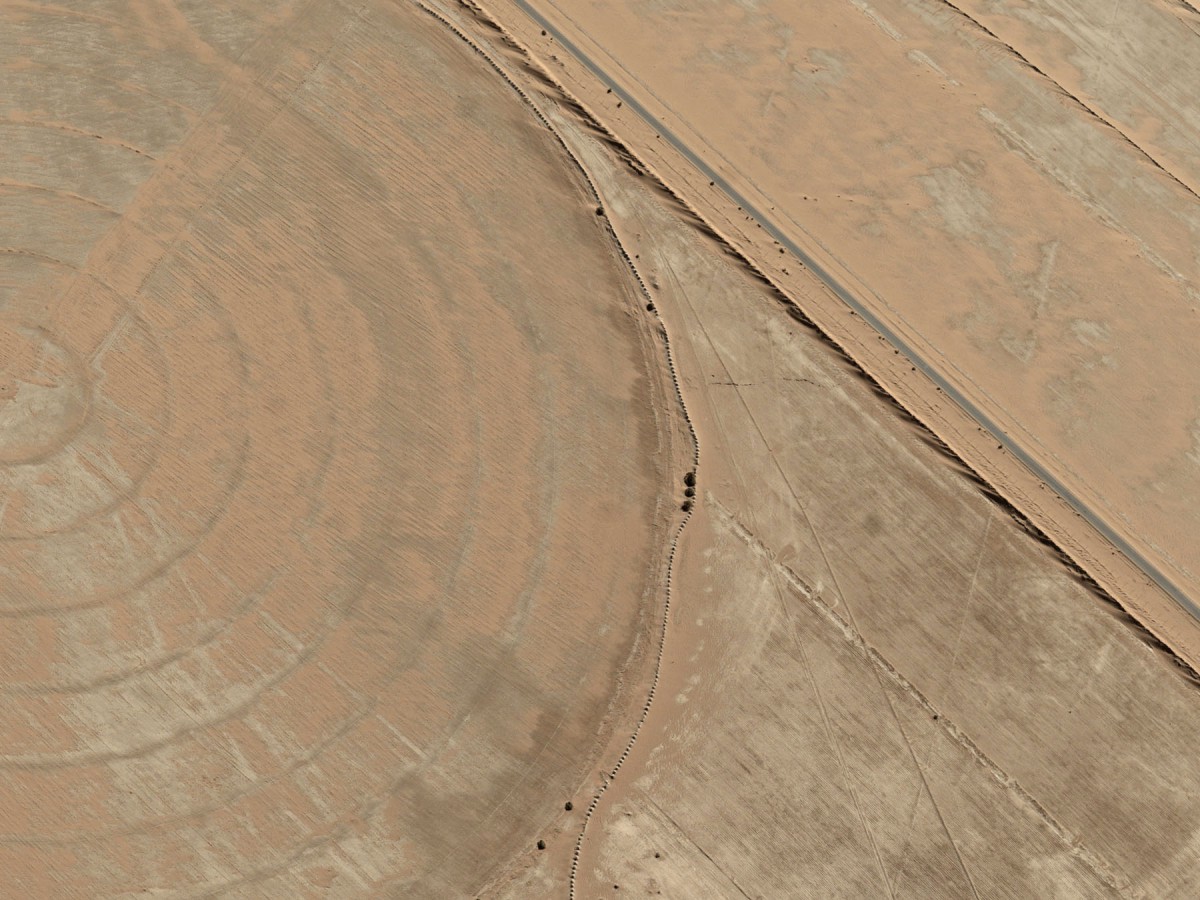 JR: While Shadow Sites I and Shadow Sites II are both immersive experiences for the audience, the five-monitor installation Groundworks I–V (2013) is comparatively small and requires concentrated attention. JA: When I was making the Shadow Sites films, it was important to bring together the micro and the macro. Like the sequence from La Jetée, which I mentioned earlier, there are sites in the films that are clearly large-scale architectural structures and others that could be up-close details of specimens viewed under a microscope. As for how the works are exhibited, the large-scale projection of the Shadow Sites films is a reference to cinema in contrast to the small scale of the Groundworks films, which allude to the format of early photographs, produced as contact prints, direct from the glass plate negative. Like Shadow Sites II, four of the five films that make up Groundworks are subtly animated photographs, shot on flights over the Sonoran Desert in Arizona. Unlike the Middle East, the American Southwest is a landscape in which the light touch of earlier indigenous occupation has all but disappeared. Many of the sites I photographed suggested the erasure of the human body including Native American burial grounds, deserted WWII internment camps (where Japanese Americans were held during the war) and vast prison complexes. But in the end I decided to concentrate on locations that echoed the function of some of the ancient sites featured in Shadow Sites I and Shadow Sites II such as open-cast mines, industrial arable farms and military training sites. The fifth element of Groundworks is a re-mastered edition of my 16mm film Excavators (2010), featuring a group of ants building a nest in the sand. Going back to the issue of scale, one of the reasons I introduced this ‘real’ film element into the work was to set up a tension in the installation between the still and moving image and between the ‘microscopic’ view on the ground and the long-distanced cartographic view from the air. Many of the sites I photographed for Groundworks were redundant or disused and I became interested in how access to so much of the American Southwest continues to be restricted because it is home to both the Air Force and the Central Intelligence Agency’s unmanned drone programs. When I was researching possible locations to photograph I made use of the extensive online database of the Center for Land Use Interpretation, which even lists air bases from where drones are operated, most of which are located in desert landscapes strikingly similar to those that the drones are surveying more than 10,000 kilometres away. By shifting the focus from the Middle East to the American landscape in Groundworks, I was trying to draw on the similarities rather that the differences between these territories. Also, by putting the viewer in the position of the all-seeing drone I hope this returned gaze would allow us to scrutinise a landscape with which we are not so familiar. JR: For Groundworks you hide the monitors and, for Shadow Sites, you want to erase the screen. JA: Yes, although the Shadow Sites films are large-scale projections, I want the experience of viewing them to be immersive but not as comfortable as a cinematic experience. Hence my insistence on having the screen framed by the walls and floor and for the ceiling to slope down to meet the top of the image. This seems to create a slight sense of vertigo when viewing the films, as if one could fall into the screen. As for Groundworks, each of the five films is shown on a small monitor and the images are cropped, using a series of bespoke frames, in a range of geometric shapes including a square, circle and triangle. Because I have hidden the frame of the monitor and the movement in the films is so subtle, it seems at first that we are looking at a set of backlit light boxes rather than a series of screen-based films. So the intention is to raise questions about the medium as much as the image. I am also drawing attention to these geometric shapes in the landscape in order to emphasise just how common and universal they are. I have found them recurring in the footprints of temples, villas, forts, mines and field systems across time and place. JR: You’ve shot the Middle Eastern and the American Southwest. What landscape will feature in your next project? JA: As I mentioned earlier, I’m currently developing the third and final chapter of this work, which I’m shooting in the UK. I feel this is the remaining element in the triangle of geopolitical relationships I’ve been exploring in the Aesthetics project. A story that begins with the marriage of flight and photography at the start of the twentieth century and explores the consequences of Britain’s historic role in the formation of both the United States of America and the modern Middle East.