Looking back at Sonic Acts Academy 2018

From 23 to 25 February, Sonic Acts took up residence in Amsterdam-Noord for the second edition of Sonic Acts Academy – a new platform geared towards unpacking the processes of artistic knowledge. Across three days, we turned to a diverse community of artists, teachers, tutors, mentors, thinkers and tinkerers, to exchange ideas and push for alternate pathways in the field of education and knowledge production. In the weekend prior to the Academy, festivities were already getting under way, with a celebration of the work of Swedish composer, philosopher, poet, mathematician, and visual artist Catherine Christer Hennix (1948). The celebration was part of a long-term research trajectory – initiated in 2017 by Stedelijk Museum Amsterdam and Sonic Acts – with a mission to diversify the canon of sound art. On Friday 16 February, we witnessed the world premiere of Hennix’s new sound piece Blue(s) in Green to the 31 Limit – echoed by a second performance of the piece the following day, and a symposium on Sunday 18 February with Marcus Boon. In a poison-green lit Teijin Auditorium, an electronic drone buzzed with fluttering overtones. The dizzying sound field was augmented by experienced improvisers Benjamin Duboc, Rozemarie Heggen, Hilary Jeffery, and Marcus Pal, who performed alongside the composer in an exploration of concepts of space; specifically, while continuing their ongoing experiments in micro-tonality and just intonation, the musicians attempted to halt our experience of space-based phenomena, and they succeeded.

Later that week, artists Mario de Vega and Victor Mazón Gardoqui led a hands-on workshop at the Rijksakademie van beeldende kunsten, exploring disruptive technologies. Participants learned methods of translating wireless architecture into material sound and used media intervention as a means to explore, control and interrupt local signals and radio transmissions. As the Academy edged closer, two films were screened at EYE Filmmuseum on 20 and 22 February, accompanied by Q&A sessions with their respective filmmakers. The subject of experimental feature Spell Reel – simultaneously a tribute, documentary and an excavation – was a trove of so-called revolutionary films shot to chronicle Guinea-Bissau’s war of independence from Portugal in the 1960s and 70s; from isolated villages in Guinea-Bissau to European capitals, the silent reels are now the place from where people search for antidotes for a world in crisis. The second film, Time Passes, was a documentary-like film by artist Ane Hjort Guttu. Time Passes centred on a controversial Norwegian art project, highlighting the potential and limitation of politically engaged art. Both films offered a fitting bridge to conversations that would characterise the Academy’s main programme over the days to come, contributing to debates about artist responsibility and education’s role in understanding and engaging with reality. Indeed, as society rapidly changes under the pressure of economic, technological, and political expansions, understanding and engaging with reality becomes especially important. On a local level, one noticeable change can be seen in the expansion of Amsterdam’s current markets to Amsterdam-Noord, where the Academy this year was principally located. On the ferry to the north, across the river IJ, the public was welcomed to the Academy by two screens displaying the Academy’s visual design by studio The Rodina; once there, the Academy’s venues, such as Dansmakers Amsterdam and Paradiso Noord, Tolhuistuin – industrial remnants repurposed as cultural destinations – set an appropriate backdrop to topics presented throughout the programme. On Friday 23 February, the Academy officially opened at Dansmakers Amsterdam, with an energetic programme of talks and performances. Educator and curator Nora Sternfeld delivered the keynote lecture on the topic of artistic and curatorial research; sound artists Jennifer Walshe and Mario de Vega came together again for a live improvisation to Walshe’s film An Gléacht; and we closed the evening with the world premiere of Maria Bozinovska Jones’ performative piece Fascia 171208180222, with an AV and laser set together with musician J.G. Biberkopf. Earlier in the day, just down the road, Academy visitors could experience an experimental environment envisioned especially for the occasion by students of the ArtScience Interfaculty (KABK). Entitled Sensing the Place, the environment was the outcome of a collaborative research project between KABK and Sonic Acts, in which students examined different ways of mapping and understanding a space based on their senses. To round off the evening, we travelled to Paradiso Noord, Tolhuistuin, for the first of the Academy's two night-programmes: a continuation of the ongoing series of monthly club nights Progress Bar. The line-up for Friday night’s portion promised little interest in comfort, and it certainly fulfilled. With artists Wartone, Anni Nӧps, Geng, Violence, Dreamcrusher, Swan Meat, Moor Mother, M.E.S.H, Kilbourne and Born in Flamez, Progress Bar welcomed dancers to tread into a dark confrontation with noise, alienation and resistance, while reconsidering the potential of club space as a realm not merely intended for dancing. Just as Sonic Acts Academy opts for an inclusive community, involving those who resist, Progress Bar similarly aims to represent radical equality, communality and hopefulness, engaging a growing community of artists, academics and activists who occupy clubs for a better politics. During the night, visitors ventured into the strange sci-fi worlds of two installations: 3049 by patten and Hidden Layers by Shadow Channel students. Situated in adjacent rooms to the club, both installations were saturated with radical proposals for a new future. 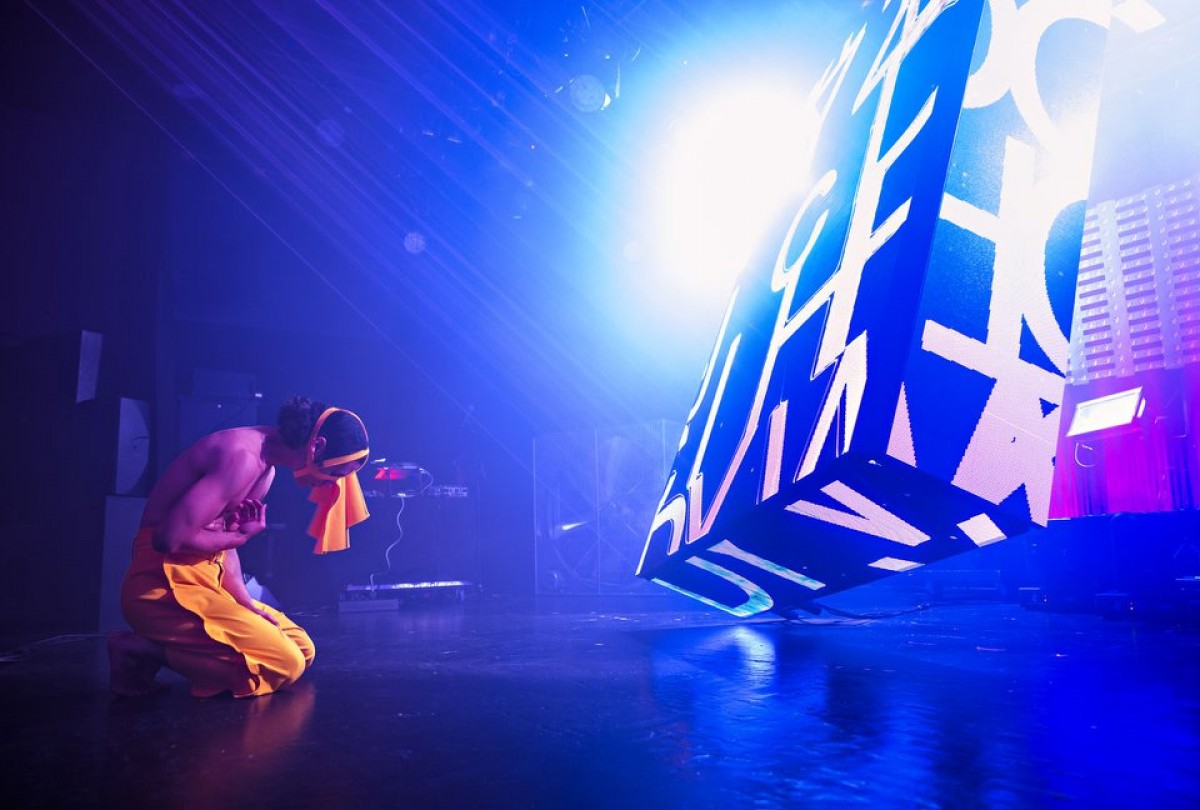 At its core, Sonic Acts Academy 2018 was focused on the critical examination of knowledge production in the field of art, and much of this took place at Dansmakers during the two-day symposium on Saturday and Sunday. Offering an experimental setting free of institutional pressure and privileged classrooms, the first day of the symposium set forth to address the function of art and the artist from various dynamic perspectives. Among the many lectures, panel talks, and artist presentations, Birgit Bachler discussed the challenges and opportunities of creating and evaluating artworks and design artefacts within a more-than-human context; and Sasha Litvintseva and Daniel Mann attempted to define the assemblage of forces that converge around sinkholes, with a presentation that included a screening of their film Salarium – exploring topics such as the Israel-Palestine conflict, climate change, tourism and spirituality. The results of a number of speculative ‘festival’ modules devised together with different educational institutions were also presented, including Logistical Nightmares – an initiative of the Centre for Research Architecture at Goldsmiths, University of London – which explored the increasing ubiquity and prominence of logistics as a model for organising social life and politics at a global scale; Continuum – an alliance of the departments of Product Design, Graphic Design, and Interaction Design at the ArtEZ Academy of Art and Design, Arnhem – which mapped new fields of work in design education; and a panel with students and scholars from the National Research School in Media Studies, in which they explored the necessity of the present for art. On Saturday night, we returned to Paradiso Noord, Tolhuistuin, for the second half of a twofold Progress Bar programme, where Juha, PARADISE, Lyzza, Linn de Quebrada, Dinamarca, Ase Manual, DJ Lycox, DJ Haram and Drippin staged a diverse array of sounds, derived from locales such as the streets of Lisbon and the parties of Sao Paulo. In contrast to the previous night, Saturday night’s line-up stepped up the intensity on the dance floor, as each artist brought a frantic energy that persisted into the early hours. Both nights, however, were framed equally by awe-inspiring light and stage design, with an extensive LED architecture developed by media artist Karl Klomp. On Sunday, the second day of the symposium delved beneath the surface of the everyday to expose the possibility and necessity of alternative perspectives. Through shared journeys and personal narratives, both imagined and real, we found ways for knowledge production to be challenged, decomposed, and rethought. An early highlight was Christina Kubisch’s presentation Magnetic Attacks: Forty Years of Electromagnetic Investigations, with which the sound artist discussed her ongoing project Electrical Walks – a series of public sound walks with headphones that receive electromagnetic signals from the environment and convert them into sound. Jennifer Walshe’s presentation Imaginary Histories was another focal point, as Walshe followed on from her performance at the Academy Opening by making a case for how research can contribute to creating entirely fictional art and worlds.