By Nelle Gevers Bats have for long belonged to the night, the unknown, to darkness and blindness. A semantic field that in Western traditions often escapes explanation. Bats are still mysterious. Maeve Brennan’s film, Listening in the Dark (2018) allows us to follow and shift our senses, and tune them towards the experience of bats. Through delicate and humble explorations, we approach a realm of fragile perceptibility. At the core of the film is an organic relationship to darkness and the unknown, that puts bats at the centre as indicators of other modes of sensing environments. Bats orient us towards the unimagined which we often fail to register. Bats use echolocation, geolocating themselves in space through frequencies the human ear cannot hear. A sound world that does not belong to us, which we cannot sense. Bats have been found dead near wind-turbines. This is unexpected, since they are known for being able to gracefully avoid obstacles, thanks to their developed shouts and reception of ultrasounds. The dead bats show no external signs of collision. Their hearts have been exploding internally, due to the disturbing sonic frequencies emitted behind the turbines’ blades. These sonic intrusions are so strong that they cause the bats to die. A crisis, a sign exclusiveness towards other frequencies, as vital entities. The film then shifts towards ways humans have borrowed such modes of localisation as tools. Radars, sonars, scanning the bottom of the sea, registering images, mapping territories. Brennan reveals the intrusive qualities of such devices, borrowing strategies from the environment, it heavily intrudes. Broad-back whales for example, emit sounds towards the colder and deeper currents of the sea enabling such sounds to travel at great length. Sonars interfere with these levels of frequencies, causing confusion and extended damages. 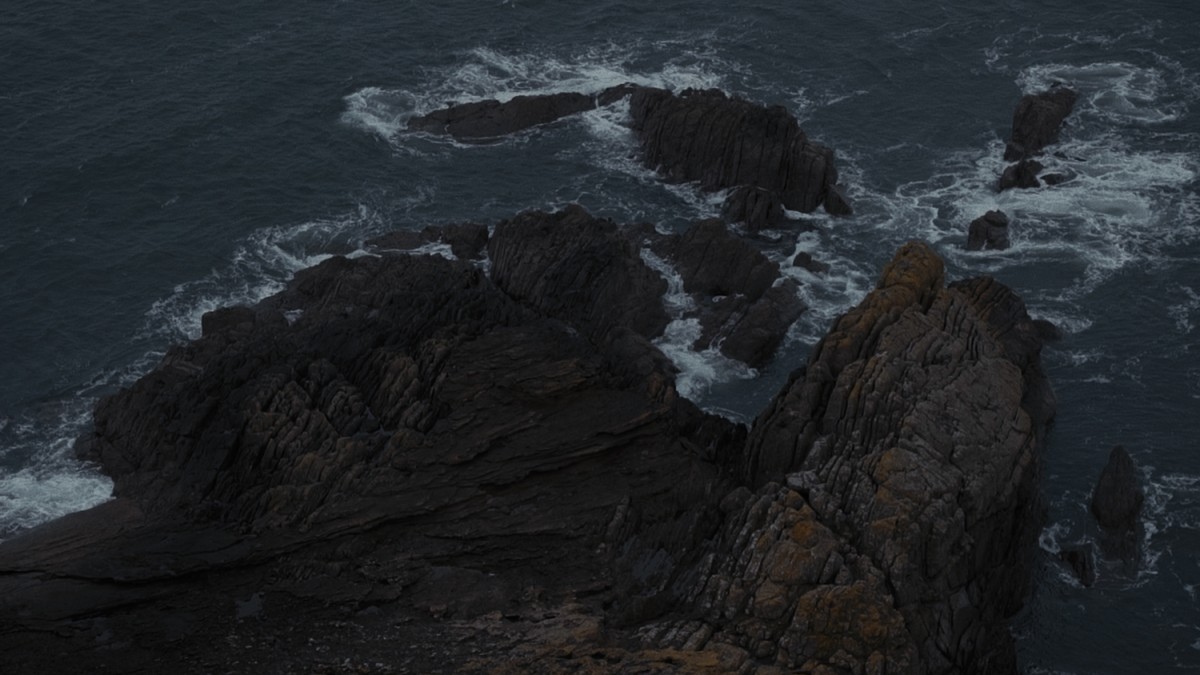 By many aspects, Brennan’s film operates through analogies. Each piece being the metaphor of one another. The form equates the content. Brennan glides through darkness and lets each element of her research shine light upon the others. The process is articulated through a methodology embracing darkness which then is translated visually. Most of the film is filmed in darkness and we follow scientists, careful not to intrude. The film deploys archives of past researches, interviews and hypnotising footage, letting each of these elements speak for themselves. Brennan does not project a totalising linear storytelling anywhere, she instead makes her work porous to unresolved and mysterious stories of otherness. Narratives in her film are over-layered, profound, where coexist different notions of environments, times and senses.

Through water air and land, Waves are used to search out the invisible* After the film, my mind and ears made porous, seemed a good time to experience the Electrical Walk by Christina Kubisch. I walked around in Amsterdam wearing earphones that allowed me to listen to electrical signals translated into sound. Loosely following a map locating electrical points of interest, I carried myself fluidly from buzzing shop-fronts to elevators, passing by drony parking lots and tickling sounds of jewellery displays. The two volume levels you can choose from, overlay with the usual sounds of the city, while you walk through strata of frequencies, through a multi-map of layered perceptive tools. These maps brought me to places I would otherwise not have gravitated towards: I heard ticking sounds, strong waves of depth, difficulty loud front-doors, pleasant blinking led lights. After 30 minutes, I realised that my ears were leading the way, thoughtlessly, passing amused above tram rails and driven by as many tickling sounds as possible. I ended up turning the volume of the earphones up, when the sound of busy streets overwhelmed me, I felt comfortable navigating with such new frequencies at times sounding like a mesmerising noise concert, whilst remaining permeable to my usual locating tools: my sight, hearing, body. My head movements changed quickly as its orientation now affected my hearing greatly. My usual repertory of movements changed. Yet, I was still unable to decipher the spatial indications through the earphones, not yet linking a sound to a space or an object. I was getting there slowly, or rather, it was getting towards me, creating an archive of sounds and their electrical equivalent in my inner library of senses. The electrical walk seemed a wonderfully executed way of tuning in to another ecosystem, one in which I embraced my own cluelessness and opened up to a fluid sensing of space and time. I sensed another frequency, locating myself within a realm defined by my electrical blindness, incorporating itself softly upon my usual environment-registering. 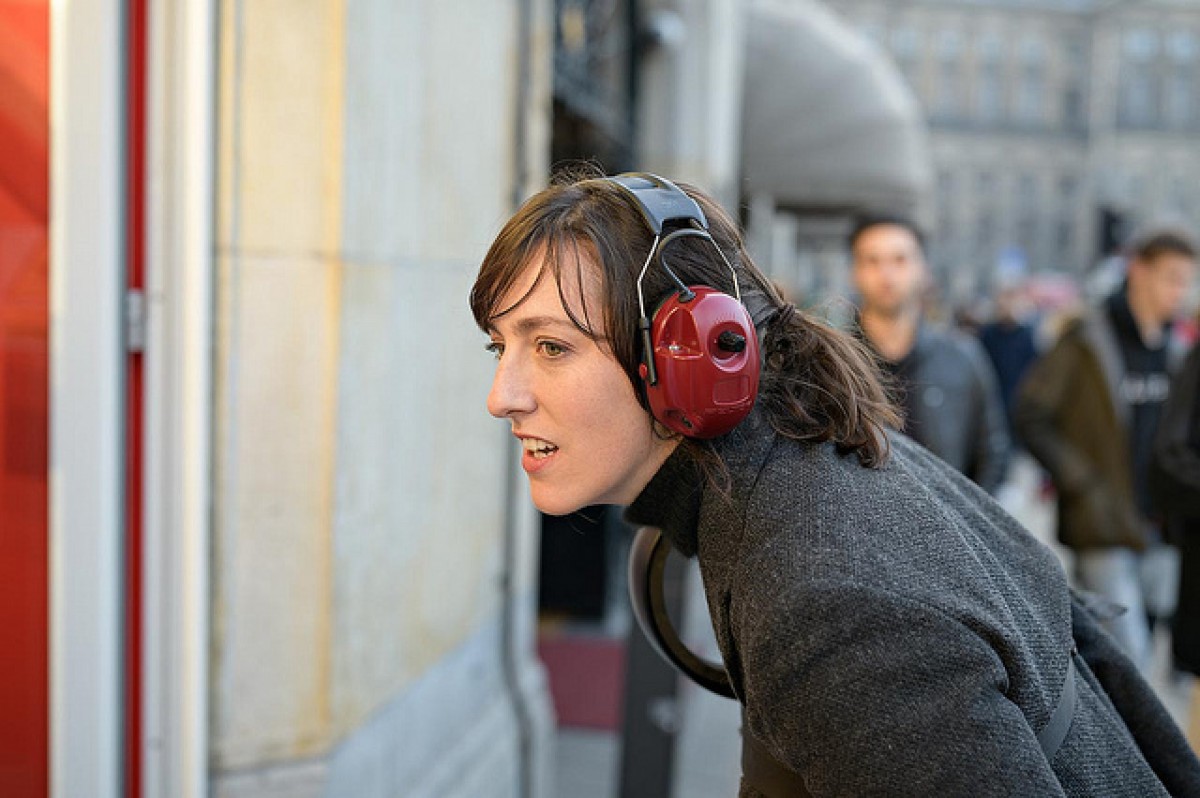 Considering now all communicative tools as frequency-defining, self-location as lexicon, either rejecting or including their own cracks and blind spots, my search for porosity drifted towards the ecosystems built by the vocabularies in use at Sonic Acts. In his talk “Out of Nature: How a Concept Became a Political Power?” Didier Debaise reminded us how some words allow us to see, other deny the depth of unknowns. Using the example of the word “Nature”, Debaise illustrated calmly how the use of this term, encompassed the other-than human in a single and flattened entity, denied of its many depths and infinity of systems. The use of such words restricts possibilities of frictions, rules out spaces of mysteries and leads to rather passive and paralysing encounters with environments. Defining a multiplicity of existences beneath the spell of a unique word “Nature”, as all that is other, or outside, emphasises the limits of our perceptions without challenging them. It traps us within our own blindness, ever-dismissive of various frequencies in which undefined entities are operating within. Can we consider our lexicons and the vocabulary in place within the enlarged ecosystem that includes electromagnetic frequencies and ultrasound outside of the human senses – as indicated by several of the works at Sonic Acts? Are the naming practices we use sufficiently attuned to porosity and do they include other semantic fields, languages, locating perceptions, rhizomatic mappings? How can we develop a practice of obscurity as methodology, avoiding sterilising buzzwords but rather densifying the strati overplayed beneath contemporary notions in use? The Sonic Acts Festival welcomed evolving notions of time, representation, intertwined issues unravelling through one-another, various manners of rendering visible, arrays of possible perceptions of identity, cross-disciplinary pieces and experiments… yet, the consistency of the vocabulary in use, at times felt as though each word validates another all too well. Maybe we could place the eroding potential of our vocabulary as a quality to be continuously cared for.

Continents are washed away While others form beneath the sea*

* quotes from Maeve Brennan’s Listening in the Dark, 2018.
This site uses cookies.