Listen to the lament of capitalism. On Christina Kubisch Electrical Walks.

by Francis Sosta When last year I attended the intervention of Sound Art's pioneer Christina Kubisch at Sonic Acts, introducing her ecology of works and the Electrical Walks, it was the very first time I´ve seen the artist talking in person. Somehow her presentation, describing a panorama of more than 30 years research on sound space and sound installation, reached me as a very personal story, a story of a deep curiosity towards the mystery and the contradictions of life. I remember she mentioned the encounter with John Cage and how much she enjoyed the time with him, such as you would describe the good moments spent with your best friends, when nothing need to happen really. Afterwards, she talked about how the Electronic Walks started and how she came to the idea of designing devices – her famous headphones – that allow people to walk freely and hunt for the sounds of electromagnetic radiation; she seemed honestly worried, within her artistic practice, about people's freedom of movement, and in a way, she looked really determined in making her audience explore open, bigger, different territories: spaces revealed by their sound. To listen to the imperceptible, a special pair of headphones are there to make the magic. The technology she developed and incorporated in the cable-less devices, allows us to listen to, basically, another kind of space: the invisible space of everyday life, the inaudible space, the space underneath, the space in-between, the space occupied by electromagnetic energy. A space composed by hidden structures and secret configurations. At that time I was unaware of the body of work of authors such as Salomé Voegelin and Brandon LaBelle, and their speculations on the social, political, and cultural implications of listening to the invisible, the inaudible, the imperceptible, the unrepresented, the not yet-manifested; as gestures of becoming aware of the multiplicity of agencies of reality. Nevertheless, that time the world revealed by Kubisch in her Electrical Walks fascinated me deeply, and entangled my curiosity to see sound as a medium to explore the relationships in the immaterial world; a sort of tool for sub-atomical investigation of the politics of perception. In that occasion, the work of the Electrical Walks blew my mind. I was fascinated by the ability of Kubisch to compose, and in her multidisciplinary approach, to manifest a dimension, new to the world of sound art, and unexplored in the realm of visual art. By mapping the electromagnetic field produced by the thousands of cables transmitting electric energy in the urban space, she let a new cartography emerge. This year's Sonic Acts Festival featured an Electrical Walk that Kubisch developed for the city centre of Amsterdam, which presented me with the occasion to actually experience her work. Christina Kubisch´s Electrical Walks were welcoming the audience at the entrance of this year’s Sonic Acts Festival, where Kubisch also led a three-day workshop The Hidden City, as part of her ongoing Electrical Walks project. On Friday afternoon, before it was getting dark, I put on the red headphones and I walked out the door of De Brakke Grond, with a certain sense of excitement. As I turned the headphones on, a continuous stream of electrical sound with different frequencies reached me. It sounded like switching on my ears for very the first time. I realized how much we are constantly immersed in the electromagnetic noise of the city. This precise realization, the sense of having all these pattern of waves, these invisible vibrations around me, made me for a moment move into another dimension: a secret and uncanny one, where street objects revealed their voices, and roads spoke; where voices were given to the infrastructures of modernity: tram lines, screens, neon lights, and even ATM’s and security doors have a lot to say. Listening to it was about mapping that new space. I tuned myself to all those voices that had been inaudible only a few seconds before. Composing with an altered way of listening, Kubisch unfolded the electromagnetic signals´ changes and dynamics in time, and made audible the kind of vibrations, or streams of vibrations, that are affecting our bodies daily, without been heard. Aren’t we exposed already to way too much city noise? Acknowledging that a new form of air occupation, with a completely new ecology beyond our audible threshold, is occupying the air felt to me, for the first time, abusive. Or maybe abusive was the intention as such to listen to the sound of electricity. Giving a voice, an agency, to the electromagnetic signal. I started navigating the space very diligently following the map in my hands, finding this mood both educative and oppressive, as I discovered many details in the space I explored, but also very often I decided to make detours. At the very beginning, it took me a few moments to understand her directions, not because they were particularly complex, but because of some resistances raising from my side, I suppose. Resistances coming from a certain idea of following directions without knowing if they were fully understood or correctly interpreted. In that moment, I encountered the typical sensation of tension and drama, intrinsic to the idea of performing a score in experimental compositions. The Electrical Walks come indeed with a map, made by Kubisch, where a path is indicated through selected audible electrical marks spread in the city. The map serves not only to locate these spots, but as an invitation to listen to streams of hidden sounds. This invitation, however, is more than a suggestion. The more I walked according to her map, the more I started understand and read it as a score. Indicating the movements of the head, the changes and inclinations anyone should follow at any given location, Kubisch created a piece, the audiowalk as such, that has a structure, namely the map, that works as a score which deliberately encompasses the unpredictable and the unexpected. Duration, dynamics and intensity are totally controlled by the listener, who, while following or not following her indications, is performing the piece, transmuting every walk into a new performance. In this understanding, whoever would listen to her composition, would also become the performer, and the piece would always be performed differently, maintaining the same score, the map. Kubisch is playing with psychoacoustic phenomena, such our ability to select certain sounds from a chaotic context, or to pick up sounds from a stream; or our ability to follow the directionality of sounds. Eventually, as soon as I realized this psychoacoustic connotations, the experience of the walk took a sort of Deus Ex Machina twisted feeling. Like if a subtle and omni-aware intelligence led me to a sequence of consequential ´sweet spots´, I was obeying to the map and moving my ears to the points where I could listen better, looking for these exact spots where the actual composition would manifest and take place. It was like someone knew, or knew better, how to listen to this particular type of sound and would invite me to encounter a selection of the best sounds. 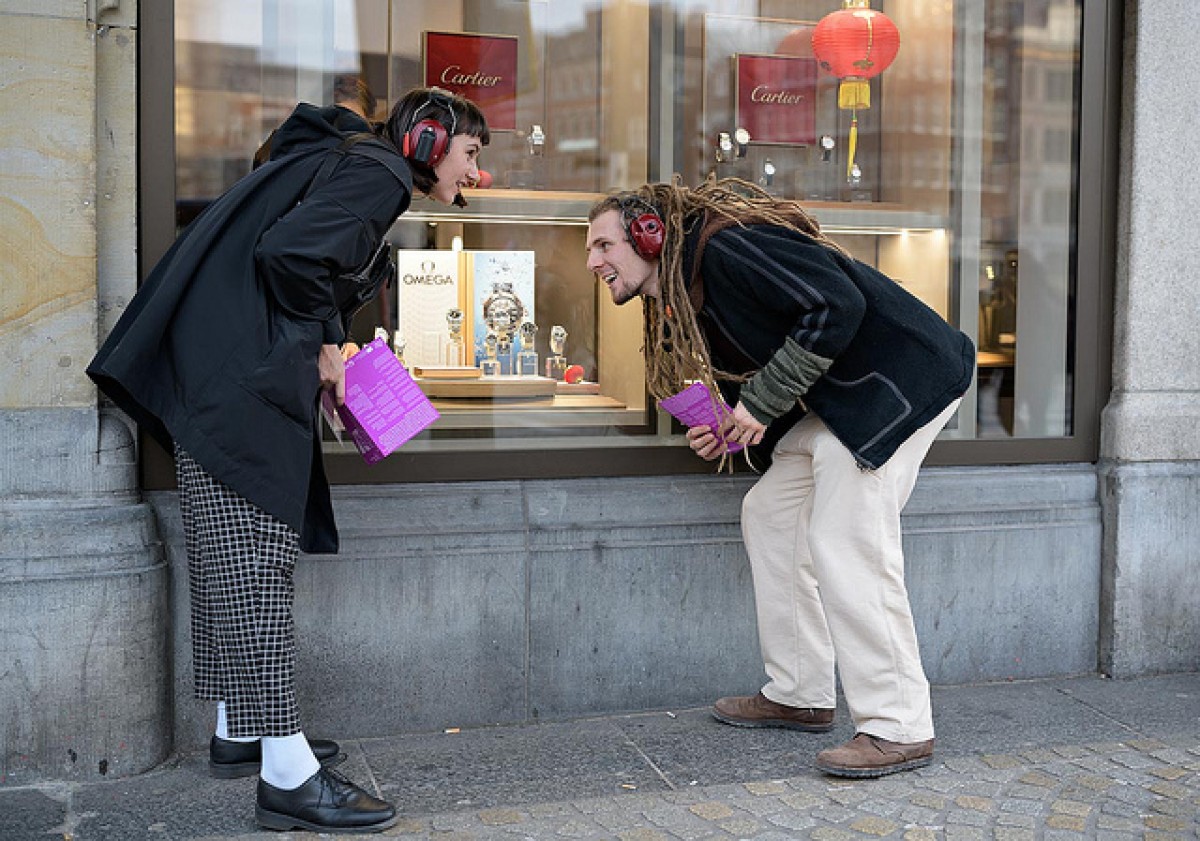 During the walk, I felt her subtle presence, a certain leading company, a sort of inhabiting: Kubisch was present in the space she composed, as she embraced the character of the alchemist who shows the secret structures of the matter and how to listen to them. The matter, this audible matter, is out there at any time to be experienced, but Kubisch in her poetical, and political way, is the one providing us the code to read it, to access this world. From a geographical, physical understanding of the space; to a syntactical reading of the piece, the Electrical Walks is a work to be performed, that is able to create space for any individual speculation. Simultaneously it exists through our perceptual potential, giving agency to things to exist, to have a voice, to produce sound (even when nobody is playing them). Just listening, the powerful, generative act of listening and giving attention to something, is enough to allow another, alternative understanding of reality to be heard. So what are those voices saying? I found the Electrical Walks of Kubisch in Amsterdam intrinsically and exquisitely political. Not in a common way of seeing a certain form of artwork as participative, nor just because of the public space context in which she positioned her walks. During the walk designed for Amsterdam and Sonic Acts, I went through many shops and crossed the City´s Center shopping mall, had listen to the windows of Hermes, Louis Vuitton, Bulgari, to the light boxes of Charlotte Tilbury, to different ATM machines and to the pulsing sound of the security cameras that are everywhere in the city. Kubisch for sure leads us intentionally to all these very noisy spots. In a way she also wants us to become aware of the nature of those public spaces, that in the majority of cases we experience as commercialized spaces, or privatized ones, and therefore come with a massive presence of barriers and surveillance technologies. To a certain extent, by performing her walk we are re-appropriating and re-activating those public environments. Our cities are now becoming more and more ‘smart’, every movement is tracked, and we are constantly trapped in the check-in / check-out / check-in / check-out dramaturgy. We all have to follow the everyday crowd management choreography, and are mostly no longer free to move and get lost. Christina Kubisch invites us to dance to the music of our liberal society´s simulacra, where ATM’s sound the worst, as bloody money machine factories. Through the oversized red headphones I listened to a lamenting electronic symphony: a melancholic concert of diffused electronic noises, all together singing a requiem for consumerism. They were not saying it’s over, though. But their desperate way to catch my attention, by compulsively yelling, shouting, pulsing, grumbling, vomiting electric sounds, so loud that many times I had to lower the volume or switch the headphones off, it seemed to me as the last, frantic voice of who is irremediably designated to extinct, and is just so afraid to die.
This site uses cookies.